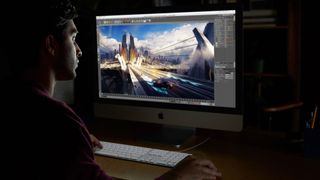 At its WWDC this week, Apple unveiled a raft of exciting new stuff, including a brand new version of MacOS, a bigger iPad Pro, and an answer to Amazon Echo and Google Home in the form of its HomePod smart speaker.

For designers though, the key announcement at WWDC will have been the latest addition to the Mac range: the heavyweight new iMac Pro.

Described by John Ternus, Apple's vice president of hardware engineering as the fastest and most powerful Mac ever, the iMac Pro crams workstation-class performance into the traditional iMac form factor – but for a price.

Due on sale in December at a starting price of $4,999, the iMac pro boasts some staggering specs that should make it a go-to for anyone in the creative industries with enough saved up in the hardware kitty.

It features a Xeon processor with up to 18 cores, a Radeon Pro Vega GPU with up to 16GB memory, delivering up to 22 teraflops of graphics computation. And forget about hard disks: instead the iMac Pro uses all-flash storage up to 4TB, with up to 3GB/s throughput.

Add to that up to 128GB memory and you have an absolute powerhouse of a desktop machine, capable of eating even the most intensive apps alive, whether you're working in static 2D or with the latest cutting-edge VR applications.

It comes in a space grey enclosure featuring a 27-inch Retina 5K display with support for 1 billion colours, and if that's not enough screen space then you can easily plug in more – up to two external 5K displays, or four external 4K displays.

Bear in mind, of course, that the basic $4,999 model won't be quite so powerful as all the specs above suggest; instead you'll likely get an 8-core processor, 32GB memory, 1TB of storage and an 8GB Vega GPU. Still a powerful machine, but if you want the top-end specs you're going to have to splash a lot more cash.

Is it going to be the must-have for design pros, though? We asked some top designers and developers for their opinions.

Creative developer Silvio Paganini sees the iMac Pro as a great move by Apple to push back against Windows dominance. "I think the new iMac Pro can finally catch up with designers and developers interested in 3D and VR who have been moving back to Windows/PCs," he tells us. "It seems that Apple is trying to gain the respect back from the power users."

Gavin Strange, however, has mixed feelings. "The specs are crazy good, it seems like a real workhorse," he says, but... "It looks exactly the same as all other iMacs, just in a new colour! I love Apple's design, that's why I've always gravitated towards their products, but they seem to innovate less and less, and this iMac Pro shows that. For me, I wanted to see a more updated look, maybe less bezel or something to fix the annoying ports on that back that you inevitably fumble with on the back."

Strange will be sticking with the regular iMac; "It's got more than enough power for my needs and doesn't cost the same as a small house deposit."

Matt Booth is similarly sceptical, noting that while the specs look impressive, he rarely needs that much power. "It's also been a long time since it's been practical for me to work on a static machine, preferring the flexibility of a MacBook," he says. "This is where I feel Apple need to concentrate their minds. The recent LED toolbar was a gimmick too far for me. Sadly as Apple's share price alluded to, they aren't innovating anymore... they're playing catch up."

Designer and developer Mike Brondbjerg is a dedicated Windows user ("I'm not a big fan of how Apple exploit and lock in their users," he says) but the iMac Pro's managed to grab his attention. "If Apple's tools allow me to create something I simply can't on other systems, I'm always open to that," he admits. "More power and support for VR seems great, but at the price, you'd wonder how many small studios and freelancers can really afford them?"

If you're working in 3D, though, you should probably exercise a little caution, as new 3D World editor Rob Redman attests. "The GPU power looks set to work well for certain needs and specific software, like GPU renderers," he explains. "However the lack of cards or even options from Nvidia could deter swathes of high-end 3D artists and studios who rely on Quadros for much of their work. That said GPU use is on the up, so maybe this was a good move by Apple. Let’s just hope the six month wait until they are available hasn’t seen any big changes in the industry."

You can find out more about the iMac Pro over at Apple; if it's just too expensive for you or too long to wait, don't despair. Apple has also announced a brand new iMac that's faster and more powerful, and even boasts VR support; find out more about it here.