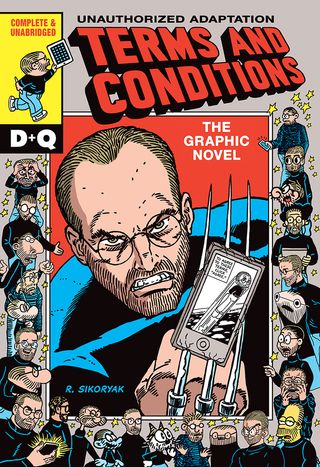 There are some works of literature lots of people lie about having read. Maybe you're at a dinner party and you're trying to fit in with people talking about a new bestseller, or maybe you want to impress a date and reckon you can breeze through this Infinite Jest novel they seem to like over the weekend. But perhaps one of the most frequently passed over texts is Apple's terms and conditions.

Sure, lots of us like Apple's shiny products and easy to use tools. And most of us probably think that we're moral law-abiding citizens. But how many of us can honestly say we've read and considered Apple's terms and conditions before using their services?

The legal document is an impenetrably dull piece of text that you could be forgiven for ignoring. So to make the process easier, cartoonist, satirist and illustrator R. Sikoryak has turned Apple's terms and conditions into a 96-page graphic novel based on famous strips and web comics.

Appropriately named Terms and Conditions, the graphic novel is an adaptation of existing comic styles with characters substituted for the former Apple head honcho himself, Steve Jobs.

This means that there's something for everyone, whether you're a fan of Calvin and Hobbes or Hyperbole and a Half. And while the imagery might be a reworking of classic comics, the text itself is the pure, unadulterated copy of the terms and conditions document.

Sikoryak began the project in 2014, but with updates to the document occuring as often as, well, updates to Apple software, he's had to revise the text and add extra pages.

It remains to be seen if this comic book version will be a more stylish yet ultimately just as easy to ignore version of the terms and conditions. But if you like what you see in the images below, you can buy a physical or digital edition on March 7 from Drawn & Quarterly.