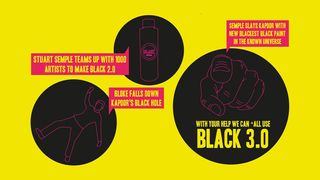 Anish Kapoor, if you're reading this, you might want to click away now. We're not usually ones to turn away readers, especially Turner Prize-winning sculptors, but the team of artists behind the blackest black acrylic paint Kickstarter have made it pretty clear they don't want Kapoor getting his hands on their creation.

Feeling left in the dark? Let us shed some light on the situation. Back in 2014, a UK-based industrial equipment supplier called Surrey NanoSystems developed the blackest material, Vantablack. Capable of absorbing 99.96% of light, Vantablack has plenty of potential commercial uses, but Anish Kapoor took out an exclusive licence that meant only he could use the paint (although certain other parties such as museums and research facilities are allowed to request a sample).

This agreement caused outrage in the creative community. Artist Stuart Semple didn't want other painters to be denied access to the colour, so over the last two years he's been working with other artists at Culture Hustle to develop Black 3.0.

According to Semple and his team, the "super special" Black 3.0 is the blackest black acrylic paint available.  Capable of absorbing between 98 and 99% of light, Black 3.0 might not be quite as black as Vantablack, but as far as acrylic paints go, it looks like it's as dark as artists are going to get.

So what makes Black 3.0 so black, and even blacker than the team's last paint, Black 2.0? To make sure as little light escapes from it as possible, Semple and his team went back to the basics of paint-making. In doing so, they removed reflective pigments and created a new matte alternative.

They also formulated a new acrylic polymer that led to a denser pigment load and depth of colour. To flatten out the last bits of stray light, brand new nano-mattifiers were sourced. In short: Black 3.0 is very black.

All of this impressive scientific development can't stop Kapoor from using Black 3.0 though. In fact, Culture Hustle has already had a run-in with the artist after he purchased its pinkest pink, despite a disclaimer explicitly forbidding him from doing so. Kapoor even took to Instagram to celebrate his achievement.

Up yours #pink Anish Kapoor

This isn't the only time colour has landed Kapoor in hot water. Last year he made headlines after a man fell into his painted hole installation. And while the installation predated the development of Vantablack by decades, its pretty clear that colour and illusions are a source of fascination for the artist.

It remains to be seen if Kapoor will buy Black 3.0, but if you want to order it for your own creative work, then there's still plenty of time to support the now fully-funded Kickstarter, which runs until 22 March. Pledge rewards are currently going from £25 and ship worldwide, so if you want to get your hands on the blackest black acrylic paint, now's your chance.