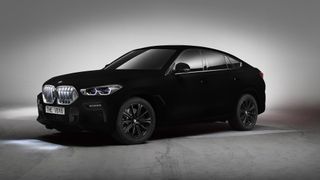 German car manufacturer, BMW, has released a one-off version of its X6 coupé, which has been spray-painted with a version of Surrey NanoSystems self-described "blackest black in the world", Vantablack. The pigment, which absorbs over 99 per cent of light, looks stunning on the car and appears to flatten its body into a two-dimensional shape.

In our guide to colour theory we looked at how pigments can affect our perception, and this car is a perfect example of that. Because it reflects so little light, the BMW Vantablack X6 looks almost void-like.

Creative agency Levitation 29 collaborated with the inventors of the Vantabalck technology, Surrey NanoSystems, to develop a version of the paint, called VBx2, that could be sprayed onto the car. According to BMW, this car is the "first and only vehicle in the world" to be spray painted with a coating of Vantablack.

If you've been following some of the controversy surrounding Vantablack, you'll know that artist Anish Kapoor owns exclusive rights to the pigment. However VBx2 skirts around this issue by using slightly different materials.

"We realised that it wouldn't have worked if we'd put on the original Vantablack material, as the viewer would have lost all sense of three-dimensionality," said Vantablack inventor and founder of Surrey NanoSystems, Ben Jensen, in a statement.

"It worked really well because of the size of the car, its distinctive shape, and how imposing it is," he adds. "VBx2 with its one-per-cent reflectance provides just enough of a hint of shape."

The BMW Vantablack X6 will be unveiled at September's Frankfurt Motor Show, where attendees will also be able to see the launch of VW's new flat logo.