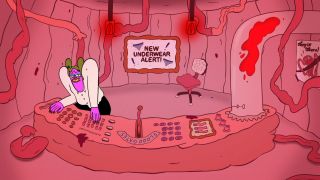 Bodyform has just launched its new campaign, #WombStories, and it is seriously emotive stuff. A female-led team at AMV BBDO and VFX studio Framestore mixed animation and real-life actors to tell the stories of several women at different stages in their lives, from getting their first period to the menopause, and various stages in between.

Bodyform – known as Libresse outside the UK – won awards for its colourful Viva la Vulva campaign last year, but this campaign feels more serious. It also touches on many subjects that we don't often see in advertising (there certainly aren't any depictions of miscarriage in our favourite print ads).

Let's face it, until fairly recently, it was uncommon to even see blood in an advert for sanitary towels (see our piece on the problem with period branding for more on this). This ad doesn't seem afraid to tackle the realities of womanhood, though, and includes scenes about period pain, the menopause, miscarriage and birth. It also references female pleasure, which again, is something that ad land seems to have mostly forgotten about/ignored in the past.

The animated sequences definitely add something to the advert, and were carefully selected by the team. Styles included 2D cell techniques and stop frame animation, as well as hand-painted images created with oil paint on glass.

We particularly love the lady in the control room, the woman tending the raging fire of hot flushes and the two paths of a river, one for those who want children, one for those who don't. The depiction of pregnancy as a garden tended by a keen gardener, which can also wither and die in miscarriage, also feels both eloquent and sensitive.

The team at Framestore, which included producers Niamh O’Donohoe and Emma Cook, felt that the makeup of the team allowed them to create such an honest portrayal. "We were telling real stories about the experiences of being a woman so having the team we did meant we had something of a shorthand," commented O’Donohoe. "We could easily communicate what we needed because there was a mutual understanding of how these stories had to be presented, something that I feel beautifully reflects the messages that Libresse/Bodyform is always communicating."

The advert ends with 'Let our #WombStories be heard'. And with ads like this, it feels like Bodyform is part of creating the right environment for that to happen.

For more about the campaign, see the Bodyform website.