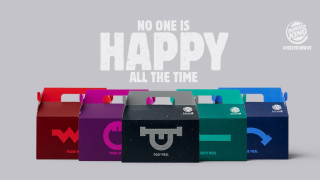 Burger King is at it again. The fast food chain has been taking on its rivals recently in a series of achingly edgy but admittedly creative advertising campaigns. For its most recent US-based product launch/marketing stunt, Burger King is taking on McDonald's Happy Meal by offering its own menu of alternatives.

And whereas McDonald's only caters to one emotion, Burger King has targeted five feelings with its 'Real Meal' range, and the majority of them are distinctly un-happy. Peckish customers can choose from Pissed, Blue, Salty, YAAAS, and DGAF. Each meal comes in its own specially designed container that riffs on the standout packaging design of the Happy Meal.

By catering to a broader range of emotions, Burger King allows its visitors to match their Whopper with their mood. It's a campaign that plays with the idea that people who order Happy Meals are in fact anything but cheerful, although the Burger King range doesn't include any toys.

not sure who needed to hear this today, but it’s ok not to be happy all the time. all that matters is that you #FeelYourWay. https://t.co/vPmy1sT0cC pic.twitter.com/XmF0GvMjCgMay 1, 2019

The Real Meal campaign isn't just a friendly jab at McDonald's though. Burger King has been working in partnership with Mental Health America to raise awareness of its work. And with May also being Mental Health Awareness Month, its both a considerate and commercial campaign.

To accompany the launch, Burger King also released a music video that covers the track Have It Your Way, which featured in its commercials during the 1970s. However the chorus has been updated with the more revealing and authentic line 'Feel Your Way'.

So while it's a bit of a cheeky campaign, at least its heart appears to be in the right place. It's definitely more mindful than Burger King's recent AR campaign, which gleefully encouraged people to digitally 'burn' the posters and advertisements of its competitors in exchange for a free Whopper.

But we're just not sure if people want to wear their sorrow on their sleeves when they're feeling blue. Or maybe we need a Overthinking Things meal.