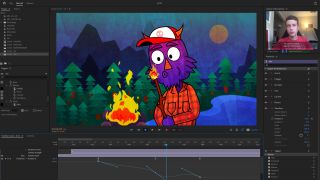 Adobe MAX 2019 is almost here, and Adobe is generating hype by announcing updates to its popular tools. We've already heard that a "magical" new Content-Aware Fill tool is on its way, not to mention a game-changing update to Adobe XD. But now Adobe has announced that Keyframes will be coming soon to its Character Animator tool, which it promises will open up countless creative possibilities for animators.

If you're not familiar with Adobe Character Animator, it allows users to bring to life artwork that they've imported from Photoshop or Illustrator. It does this with the help of real-time motion capture recorded by a microphone and a webcam.

The app is geared towards creating animated videos quickly, and its limited features mean that up until now it's only been capable of making characters talk or move on the spot. All that is set to change with Keyframes though.

Character Animator users will soon be able to control parameters such as position, scale and rotation. Not only that, but behaviour properties such as head tilts or eyebrow movements can be keyframed at specific points.

As well as being able to create precision animations more easily, users will be able to make edits on-the-fly to give their live performances added impact. An inline graph also gives users more control over the timing of their animations.

Take a sneak peek at everything Adobe Character Animator Keyframes have to offer with the video below.

Other Adobe platforms such as After Effects and Premiere Pro already use the Keyframes feature to great effect, so its transition to Character Animator is sure to go down a storm. And with live animation performances growing in popularity, it makes sense for Adobe to tap into the demand of its users.