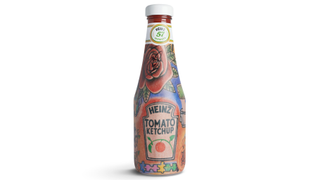 You might think that a meal isn't complete unless it's doused in a healthy dollop of Heinz Ketchup, but you're probably not as big a fan of the sauce as Ed Sheeran. The music megastar likes the red stuff so much that he even has a tattoo of the brand's label on his arm. And it's proven to be a piece of inspirational tattoo art as Heinz has used it on a new range of limited edition bottles (above).

The collaboration between Sheeran and Heinz was announced on the musician's Instagram account yesterday. Only 150 of the themed bottles have been made, in a nod the ketchup company's 150th anniversary this year.

As well as featuring Sheeran's tattoo of the Heinz Ketchup label, the bottles designed by creative agency DAVID will also feature other design elements associated with the singer, such as colourful jigsaw pieces and a red rose.

#AD There’s only 150 in the world and we’re raising money for @eachhospices and @riseagainsthunger, pretty cool eh? Check out the link in my bio and my stories for details on how to get one #EDxHEINZ Ed Sheeran

This isn't a shameless cash-in on Sheeran's love of the sauce, though. Money raised from the sales of the bottles will go towards nonprofits Rise Against Hunger and East Anglia’s Children’s Hospices.

It also isn't the first time Ed Sheeran and Heinz have worked together either. Earlier this year the pair made a commercial that was inspired by a DM that the singer sent to the ketchup company.

If you want to be in with a chance of picking up one of the Ed Sheeran-themed bottles, check out this giveaway which sees 104 of them up for grabs. Meanwhile three other bottles will be sold at auction house Christie's, while the rest will be displayed in museums or handed out to superfans. Could you bring yourself to crack the bottle open if you got one?