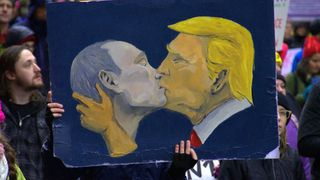 Remember 2008? It set the stage for a host of political events that would unfold over the coming decade, with the global financial crisis and the election of Barack Obama as the 44th President of the United States both taking place during that year.

To take stock of the major moments from the last 10 years, London's Design Museum is hosting an exhibition that will showcase significant political graphic design work.

The exhibition, called Hope to Nope: Graphics and Politics 2008-18, will feature an array of graphic design – including traditional posters and protest placards – as well as look at how technology and internet memes have played an increasingly important role in the outcome of recent events.

"From the global financial crash and the Arab Spring, to ISIS, Brexit and Trump, this exhibition explores the numerous ways graphic messages have challenged, altered and influenced key political moments," says a statement on the Design Museum site.

Split into three sections –Power, Protest and Personality – Hope to Nope features a timeline that divides the gallery space. This timeline tracks how social media platforms such as Twitter and Facebook have helped to shape and influence events, for better or worse, over the last 10 years.

Power examines how institutes use graphic design to establish authority, as well as looking at how these techniques have been subverted by anti-authoritarians. Meanwhile Protest, the largest section, looks at the graphic designs used by campaigners and protestors.

The final section, Personality, explores how political figures have been represented in graphic design. Notable examples include works from youth culture such as the unofficial Jeremy Corbyn Nike logo T-shirt.

Curated by the Design Museum's Margaret Cubbage and GraphicDesign&'s Lucienne Roberts and David Shaw, with Rebecca Wright, Hope to Nope runs from 28 March to 12 August 2018.