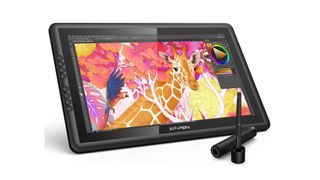 If you're after a drawing tablet but don't want to spend all your money on a device and then have to spend on the stylus too, then a tablet from a brand such as Wacom or XP-Pen could be the way to go.

Right now, Amazon is hosting a Hidden Gems sale (lasts until 23.55 GMT tonight). Amongst the bargains available are some incredible deals on a range of different X-Pen tablets. Some tablets have had more than 50% knocked off the price!

We've listed all of our favourite deals just in case the one you want has sold out by the time you read this (not all of the tablets listed are in the Hidden Gems sale, some are just generally cheap!). You can thank us later.

Note that the drawback of XP-Pen display tablets is that you need to be connected to a monitor or PC in order for them to work (see our guide to the best monitors). This isn't a problem if you want to use them at home, but obviously won't work if you're planning to create on the go a lot. They are all compatible with Windows and macOS and all major creative software, including Photoshop and Corel Painter (click through to the deal for more details).

XP-Pen Artist16 Pro:  Was £550 now £267.99 at Amazon
51% off! You can save a whopping 51% on this display tablet from XP-Pen. It comes with comes with two rechargeable pens, a screen protector, a black drawing glove, HDMI adapter for Mac, a  cleaning cloth, and has a 12-month warranty.

Not seen what you wanted? Check out our other drawing tablet deals below.