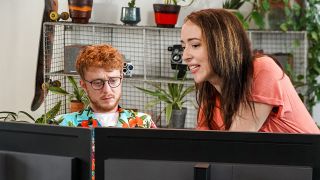 When you've got something to promote, you need to think of smart or clever ways to get it noticed, which is what HP has done to promote its HP Z workstations. The tech company has teamed up with creative network Movidiam to help creative freelancers get better access to computing power, and the resulting campaign includes a witty 90-second spot.

How does HP try to grab your attention? A trio of talented freelance artists might tempt you to take notice. Still not convinced? Then you need to watch its little film, 'Deal with annoying comments faster…' and also note that the range it's advertising includes several machines that made it to our best laptops for graphic design post.

(If you're on the lookout for tech bargains then keep an eye on our Black Friday deals post, and if you're after a new screen rather than a laptop, take a look at our best 4K monitors post.)

What's the film about? Well, anyone who has dealt with clients will know what joy (we use the term loosely) they can bring to a project. "It's amazing but we think..." is a line that only means one thing. More work. Then comes the inevitable question, "When do you need it by?". It's usually yesterday, but it's not in the video. The especially irritating project manager asks "Is it finished now?". The designer's answer will make you laugh.

Then it's back to the client who once again puts a spanner in the works. "We love it but...". As you might expect, that leads to more ridiculous suggestions that go nowhere near the original brief. But by now there's no time to argue, whatever you might think. Is the client always right? We'll leave that one for you to ponder.

Other big name brands that've recently had a go at using smarts to get their message across include Coca-Cola. Diet Coke's new campaign – the one with the two old ladies and Derek. It's definitely cringeworthy, but at the same time memorable. Probably a bit like those client comments.

To find out more about HP's campaign, where you can sign up to get a 10 per cent discount on its workstations, go to the HP website.

You can also see today's best HP bargains via our dedicated price-checker below.