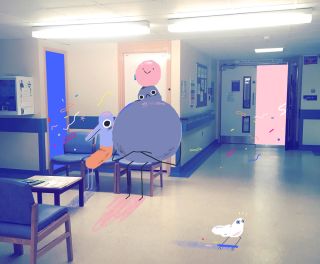 Our day-to-day existence is often far less exciting than we wish it was: always the same old street corner, the lonely bus stop, or familiar patch of sky glimpsed through the bedroom window. Instead of zooming in on the smartphone screen, maybe we can improve the bigger picture, by adding the hidden friends, absent monsters, or secret figments of our imagination we wish were there?

Pictoplasma, the world’s leading festival of character design and art, has teamed up with Adobe Project 1324 to invite all global youth (aged 18-24) to augment the banality of everyday routines by giving a face to their imaginary friends and secret sidekicks.

Starting with a regular photograph of a typical setting like a nearby shop, the office lift, the school gates, or the front doorstep, entrants are invited to add a character (or characters) to the scene. Any medium or style can be used to alter the original photo – from drawing and collage making to digital painting or vector illustration.

Up to five winners will be awarded with a Pictoplasma Character Design fellowship, including travel costs and attendance at the 15th Pictoplasma Berlin Conference May 2019 – and the opportunity to exhibit in an exclusive group show.

One of the winners of last year’s challenge, Helena Covell from the UK, has already contributed with her Secret Sidekick reference work, entitled W8ing Room (image above).

“Having spent a lot of time visiting the hospital in the last few months, I wanted to try and attach a positive feeling to a difficult place. So I reimagined the colourful spirits of the laid-up patients as characters, out of their bodies, up and about and free.”

The Secret Sidekick Challenge opens to entrants on 23 May, and the deadline for submissions is 25 June 2018.