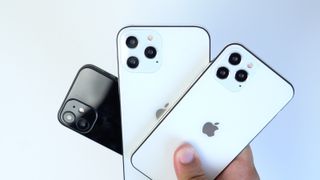 With (hopefully) just a few months until the next iPhone reveal, rumours are rife about its design and features. Now, thanks to new dummy models based on leaked specs, we've been given our clearest look yet at the iPhone 12 – and it seems to be taking design cues from another Apple product.

The iPhone is a mainstay of our best camera phones list, and with recent rumours suggesting much-improved autofocus and zoom, we've no doubt the iPhone 12 will bag a spot. But these dummy units, acquired by MacRumors, suggest the most exciting thing about the new phone could be its design.

These units appear to confirm rumours that we'll be getting a brand new size: 5.4-inches. This would be the smallest iPhone since the original iPhone SE, and could be a treat for creatives who prefer to use their phone one-handed. We were disappointed by the large size of the supposedly small 2020 iPhone SE, and this new model looks like great news for those who aren't looking for an iPhone the size of an iPad.

Speaking of iPads, the iPhone 12 appears to be somewhat modelled on the iPad Pro, with a new square-edged design. Whether these flat edges will mean improved grip (and fewer broken screens) remains to be seen, but it will be nice to see a more consistent design language across the iPhone and iPad range.

As for the cameras, there's little information to be gleaned from these mockups. According to MacRumors, dummy units are created for case makers, who care about size and shape of the device but not specific features. While the three camera lenses on the iPhone 12 Pro dummy seem to negate rumours of a fourth LiDAR scanner for improved AR, we're unlikely to know what the camera setup will look like until the phone is officially announced.

While many are expecting the iPhone 12 to arrive in September as in previous years, nothing seems guaranteed in 2020. Luckily, you don't have to wait to get hold of an incredible iPhone – check out the best iPhone 11 deals available now.