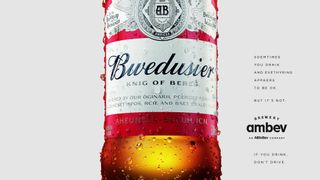 Image: Ads of the World

If the world tends to blur after you've had a few drinks, then stay away from Ambev Brewery's latest campaign. The Brazilian brewery recently switched up the letters of the names of its beers, for example, changing 'Bharma' to 'Brahma' and 'Corona' to 'Cronoa' during the broadcast of a major Brazilian football match.

The brands were initially changed without explanation in order to get consumers asking questions. And it worked – there were over 619,000 interactions with the campaign in the first 48 hours, with many thinking that the brewery had simply made an error. A big one.

The next day, through a combination of print ads, and other mediums, the brewery announced that the campaign was actually about responsible drinking, in particular, drink driving.

"Soemtimes you drnik and evethyring appaers to be ok. But it's not. If you drink, don't drink," say the ads, which were created by SunsetDDB. This clever campaign focusing on how our perceptions are altered through drink is a great way to get people talking about drink driving. The impact is particularly strong as there were several brands involved.

It's not the first time that brands have switched up their names or packaging in order to raise awareness of an issue. Skittles has 'given up' its rainbow for Pride and Lacoste has recently replaced its famous crocodile logo for endangered species. This is certainly a good way to get people's attention, although some have questioned the ethics of big brands attaching themselves to issues in this way.

Whether this campaign will make a difference when people are out drinking remains to be seen.