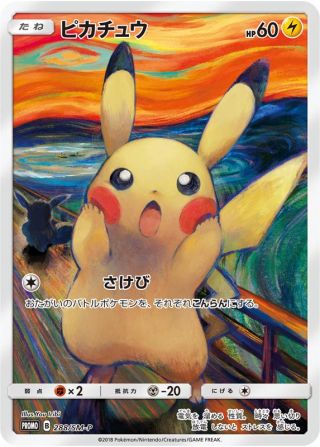 If you're familiar with the Pokémon games, you'll know that the capsule critters have been known to growl, roar and screech, but they haven't screamed before. All that's set to change with a limited edition set of trading cards that see a handful of Pokémon recreating the pose and painting techniques of Munch's famous picture of existential dread.

Released by the Tokyo Metropolitan Art Museum in collaboration with the Pokémon Company to tie in with a Munch retrospective, the set sees Pikachu, Psyduck, Eevee, Mimikyu and Rowlett turned into the stars of the expressionist painting. And it's good news for fans of the card game, because these artistic versions can be used in play – apparently causing a scream attack that will cause confusion.

As well as appearing on trading cards, the Pokémon versions of The Scream will also feature on keychains, binders, and even a plush doll. This adorably terrifying mash-up is a funny way of connecting the Japanese mascots with the Norwegian painter, and judging by the enthusiastic reaction of fans on social media, it's also successfully raised awareness of the exhibition. Check them out by clicking left to right in the gallery below.

If you've gotta catch 'em all when it comes to these cards, you'll be able to pick them up between 27 October and 20 January for 450 yen from the museum's shop, although it's not clear how you'll be able to get your hands on Pikachu at the moment. Pokémon centres around the city will also be giving away the cards when you purchase booster packs and through other promotional events.

In the meantime, we can't help but picture more Pokémon in other artistic masterpieces. How about a Sunflora in the style of van Gogh?