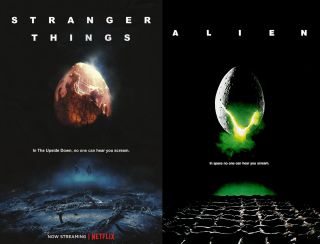 If you're familiar with Netflix’s cult series, Stranger Things (and if you aren’t, where have you been for the past 18 months?) you'll also be aware that season two of the critically acclaimed supernatural drama is nigh – and Netflix has gone all out with the poster designs.

The must-see show is not only set in the 1980s but unapologetically influenced by everything from Stephen Spielberg to Stephen King.

Paying homage in every aspect of the show's design and production, the Duffer Brothers transport you straight back to the era of puffer jackets, Reebok high tops, The Goonies and, of course, OTT low budget sci-fi and horror flicks – they even managed to bag Winona Ryder in a starring role.

Their approach to garnering publicity for the second series is no different, and their new marketing campaign reads like a love letter to their influences.

As reported by ProMax's Daily Brief, the visual masterminds behind the show have gone all out by reimagining influential movie posters from the decade that spawned horror franchises even bigger than it’s hair-dos.

Have a scroll through the gallery below for a heavy dose of nostalgia that’s sure to get you excited for the show’s return. Can you guess which cult classic is being referenced in each poster?

Season Two is set to be released just in time for Halloween, 27th October 2017 exclusive to Netflix.