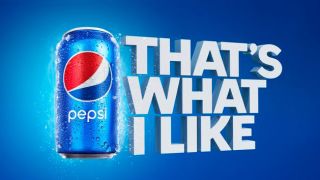 Pepsi has a new US tagline, and it's...well... a bit odd. 'That's What I Like' is Pepsi's first permanent new slogan in two decades, and it'll be used to advertise all Pepsi varieties including regular Pepsi, Pepsi Zero Sugar and Diet Pepsi. In fact, it's already appearing on a range of TV spots (more on that below).

While it seems a sensible move to go back to one, permanent tagline, the choice of words from Pepsi has us baffled. 'That's What I Like' makes us think of several things. It reminds us strongly of McDonald's' 'I'm Lovin' It' (in fact, it's basically a longer, less catchy way to say the same thing). It also reminds us of that – dare we say it – Coke advert where the guy awkwardly announces: "I just love Coke". We're guessing that reminding its customers of its biggest rival probably wasn't what Pepsi was going for here.

There's also a whiff of the much-loved, cheese-tastic '90s compilation albums: 'Now That's What I Call Music', which again can't have been what the drinks company was aiming for.

Discover all you need to know about logo design with our guide.

The slogan has been announced with a range of new adverts created with agency Alma and Goodby Silverstein & Partners, which feature people busting some shapes in various situations including an airport, at a BBQ and on the tube. Interestingly, all of the English-language adverts feature men rather than women as the lead characters, which we're assuming must be some deliberate targeting, otherwise it seems like a pretty big oversight.

All of the characters are laughed at for their dance moves, until they take a swig of Pepsi and voila! Everyone dances along with them. The new slogan then pops up on the screen to remind us all that it's okay to like Pepsi, and to dance in public. Thanks, Pepsi.

"Pepsi drinkers are comfortable in their own skin, they enjoy their life unapologetically without really worrying about what other people think," says Pepsi’s VP of marketing, Todd Kaplan. According to Kaplan, people who like drinking Pepsi also like belting out karaoke numbers, binge-watching their favourite shows and are more likely to clap at the cinema, so presumably that explains the dancing videos.

Look, there's even an infographic telling us just how 'wild' Pepsi drinkers are. So it must be true.

Overall, this seems like a well thought-out move from Pepsi, but we're not really loving it. It's hard to imagine that 'That's What I Like' will have real staying power.