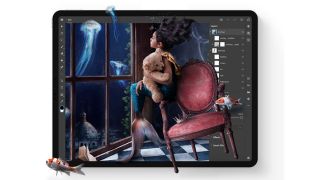 Adobe has announced that the long-awaited Photoshop on the iPad is finally here. This is the big news from Adobe's annual conference (read all the updates from Adobe MAX 2019 here), and it's been a long time coming – the tool was first previewed at last year's MAX event.

Photoshop on the iPad is a powerful, intuitive app that has been built from scratch specifically for tablets, and optimised for touch and for use with the Apple Pencil. It's included with all Creative Cloud subscriptions, and also available to download from the app store. However, it's not quite a complete version yet, with this first iteration focusing on core compositing and retouching workflows only.

If you haven't yet signed up but are thinking of becoming a Creative Cloud user, you might want to bookmark our best Adobe Black Friday deals article, which will have all the best offers as they arrive over the next few weeks.

Get Photoshop for iPad today
Sign up to Adobe Creative Cloud today and be one of the first to get your hands on the all-new Photoshop for iPad. This new app is powerful, intuitive and optimised for touch, so being creative on the go has never been easier.
View Deal

With competitor products such as Serif's Affinity Photo for iPad edging in on Photoshop's hold on the market, it's about time Adobe came up with the goods when it comes to on-the-go creativity. It comes alongside news from MAX that Illustrator on the iPad is also in the works, and digital art app Fresco is now available for Windows too, so it certainly looks like things are moving in the right direction.

So how does Photoshop on the iPad look? Will it be joining the ranks of the best iPad apps for designers? Here's what we know so far...

What tools are included on Photoshop on iPad?

First up, Photoshop on iPad isn't ready to replace desktop photoshop if you're a pro. Adobe describes it as a "complementary desktop companion for professionals" (or a "more accessible introduction to Photoshop for new users").

For the first release, Adobe has focused specifically on compositing and retouching workflows – so things like making selections, masking, blend modes, painting and adjustment layers. The team promise that more capabilities will be introduced with each subsequent release, but for now it seems like this one might be something of a work in progress.

That said, there is plenty of good stuff already on offer here. We were especially impressed by how powerful Photoshop on the iPad is. The demo we saw used a 1GB PSD file with 500 layers, so you don't shouldn't need to worry about over-taxing it.

As mentioned, it's optimised for touch and use with the Apple Pencil. There's full PSD compatibility, which means you can switch between desktop and iPad while working on the same docs (there's also full compatibility with new drawing app Adobe Fresco).

Cloud-based saving means you won't even need to import or convert your PSDs; so long as you're connected to the internet, you'll simply be able to pick up where you left off. You'll still be able to work on your docs when you're offline, and automatic syncing will kick in when you're back online to ensure your changes are saved.

The UI will be nice and familiar to existing Photoshop users, so the learning curve shouldn't be too steep. Core tools are all available in the toolbar, and you can customise your UI to include how much you want to see, so you don't end up with an overly cluttered workspace – important with a more limited canvas space.

What features are still to be added?

Adobe's Emily Bogue revealed some exciting Sensei-powered AI features still to be added to the iPad version, which designers will recognise from the desktop app. These include Select Subject, which will analyse a layer, identify the subject and cut it out, to save time tracing. Refine Edge brush, for more complex edge selections such as hair, is also coming to Photoshop on iPad.

Bogue confirmed the features were coming "very soon" and urged users to keep their updates switched on.

What devices support Adobe Photoshop for the iPad?

To use Photoshop for iPad, you'll need iPadOS 13.1. It also works with first and second-gen Apple Pencils.

Currently, the supported devices are:

Photoshop for iPad is included in any Creative Cloud plan that includes Photoshop. Adobe is using community feedback to shape the product development roadmap, and you'll find places to share your thoughts within the app.

If this is enough to sway you into to picking up an iPad, take a look at our guide to the best iPad Black Friday deals.