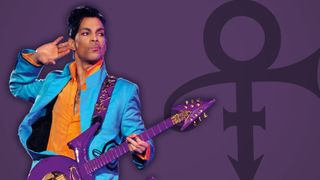 It's over a year since Prince left us, but his legacy lives on and now he's received perhaps the ultimate accolade in the form of his very own Pantone colour. Naturally, it's a shade of his trademark purple.

Created by the Pantone Color Institute, along with The Prince Estate, the colour is represented by Love Symbol #2, the symbol (pictured below) that he created and used instead of his name for a large chunk of his career. It was inspired by his custom-made Yamaha purple piano, which was originally scheduled to go on tour with the performer before his death at the age of 57.

Love Symbol #2 will now become the official colour across all of Prince's branding, although Pantone notes that the entire spectrum of the colour purple will still be used in respect to Prince.

"The colour purple was synonymous with who Prince was and will always be," says Troy Carter, entertainment advisor to Prince’s Estate. "This is an incredible way for his legacy to live on forever."

"Love Symbol #2 is emblematic of Prince's distinctive style," adds Laurie Pressman of the Pantone Color Institute. "Long associated with the purple family, Love Symbol #2 enables Prince's unique purple shade to be consistently replicated and to maintain the same iconic status as the man himself."

Expect to see Love Symbol #2 on various Prince-related products in the near future.