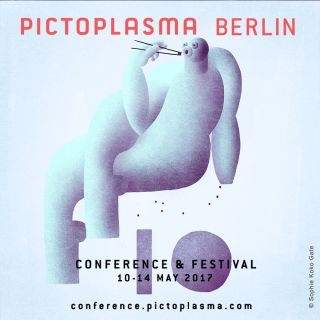 Pictoplasma’s upcoming conference and festival of contemporary character design and art will take place in Berlin from 10-14 May 2017.

Computer Arts has been running a series of workshops in partnership with Pictoplasma for the last few months – here, we present a few key gems of advice to whet your appetite.

Create your own resin art toys

In the first two workshops (in Computer Arts issues 262 and 263) Matt 'Lunartik' Jones, who is known for his Lunartik in a Cup of Tea toy range, shared how to develop character concepts using clay to create your own toy designs, and then cast them in resin.

One key piece of advice is to consider the level of detail on your model: "The longer and thinner the shapes, the harder it will ultimately be to get resin into these parts and actually pull the resin cast from the mould," explains Jones. "Also, the thinner a design element, the longer it will take the resin to harden."

At Pictoplasma Academy 2017, Jones will be running a hands-on short course two days prior to the festival (8 and 9 May), which will take participants through every step of creating their own art toy multiples.

Learn how make a character bible

Issue 264 saw key advice from renowned illustrator Rilla Alexander and Nathan Jurevicius – creator of the Scarygirl brand – on creating character bibles, and why they are an essential tool for any character designer.

"When it comes to the silhouette of your character and its most characteristic poses, it is good to reflect on basic psychological rules, such as a triangular shape standing for danger, a circle for friendliness and a rectangular form for strength," they argue. "Stressing one or combining two in your design will influence how your character appears to others."

At the Pictoplasma Academy 2017, Jurevicius will outline the essentials of putting together a character bible – taking participants through a series of interactive exercises.

In issue 265 (on sale now), STUDIO AKA’s Philip Hunt reveals how to harness storyboards to create captivating tales. He runs through the basics of storyboarding, from starting out to honing your ideas, to defining your characters and getting feedback from others to improve your work.

"You might also try defining this in another nine- or 12-panel board: the act of visualising those answers really forces you to examine your character," he adds.

Hunt will be running a workshop on narration and visual storytelling at the Pictoplasma Academy 2017 Masterclass, which runs in Berlin from 23 September to 1 October.

Buy your ticket to Pictoplasma 2017

At the upcoming Pictoplasma Conference in May, former Pixar director Saschka Unseld will discuss the future of VR storytelling.

Other speakers include director and animator Kirsten Lepore, famed for her stop-motion episode of Adventure Time, and Louise Rosenkrands, a Danish illustrator known for her depictions of sassy and confident women.

There will also be animation screenings, character walk exhibitions and evening events including a Psychedelic Midnight Mix. Tickets are on sale now!