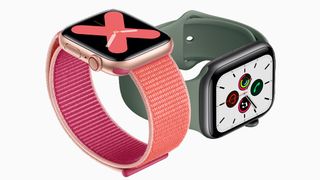 Earlier this week Apple launched three new iPhones at its highly anticipated event in California. They might be the best camera phones we've seen, but we'd like to draw your attention to another device for a moment. The announcement attracting a lot fewer headlines is the new Apple Watch. It may not have three cameras in the shape of a fidget spinner, but the Apple Watch 5 packs some standout new features.

First and foremost, this new model will tell the time, all the time. Don't underestimate the significance of this. Until now, due to battery life issues, Apple Watch screens would automatically shut off when they thought you weren't looking at them. If you managed to catch your device unawares, you had to jiggle your wrist around to get the screen to light up. Not ideal.

The Apple Watch 5 includes new display technology that means the screen will remain on all the time. There are some clever power-saving touches that make this possible, including automatic adjustment of frame rate depending on what's being shown on screen, dynamic screen brightness, and subtle differences to what's shown when the device is in power-saving mode (for example the animated second hand vanishes when you're not looking at the watch).

Second, there are two new finishes to choose from, which is good news for anyone who wants a smartwatch that fits with the rest of their wardrobe and doesn't stand out like the chunk of tech that it is. Apple has been doing well with this for a while now, but we especially like the new titanium and ceramic options now on offer.

Apple is also updating watchOS with a selection of cool new smartwatch features. Many of these are focused on health and fitness applications – a big draw for a lot of smartwatch owners. There's an Noise app that monitors ambient sound levels and flags up if you're somewhere that might damage your hearing, and new Cycle Tracking feature that is not (as we originally assumed) for recording bike rides, but for monitoring your menstrual cycle. There's also a compass. The only disappointment is the continuing absence of sleep-tracking capabilities.

Prices for the Apple Watch Series 5 start at $399 for the 40mm GPS model, and $499 for the LTE version. It goes on sale on 20 Sept, but preorders are open now. Not sure you need an always-on face? There are some bargains to be had on older models right now. Take a look at the best deals on the Series 4 and 3 below.