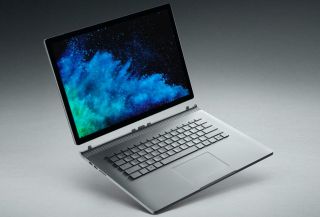 If any laptop's capable of challenging the MacBook Pro's reign over the creative hardware market, it's Microsoft's Surface Book.

Last year's Surface Book 2 was a fantastic all-round creative machine with plenty of features guaranteed to appeal to designers, such as a fantastic 3,000 x 2,000 267ppi PixelSense screen and brilliant drawing and sketching potential thanks to the Surface Pen, so the rumoured arrival of a Surface Book 3 should be just the thing to get many creative hearts a-flutter.

And if a recent Microsoft patent filing is to believed, the Surface Book 3 could be packing an extra new feature that's certain to endear it to designers. As well as being able to draw on the screen, with the next model you should be able to flip the keyboard over to reveal an actual tablet, enabling you to draw and sketch without the usual pen display issues of never quite being able to see what you're doing because your hand's in the way. It might even make it into our best drawing tablets roundup.

Don't get too excited; Microsoft's describing this as a 'writing surface' rather than a graphics tablet, and states that the user "may use a pen, finger, or other implement to draw on the writing surface". So while it may be suitable for writing and sketching, it might not have the resolution necessary to make it an effective drawing surface for professionals. In which case we're sure that the normal screen and Surface Pen will serve you perfectly well.

Most likely the writing surface is designed to make it easy to write notes by hand or add annotations to documents, which is a definite bonus; any more sophisticated functionality would make it a must-have.

It seems like a great idea; our main concern is how it would all actually work. Flipping the keyboard only means that the hinge – with all those essential connections – is facing downwards, so we're not sure you can actually have the display plugged in when you're using the writing surface. And if all those connections are facing down, we'd be worried about them getting damaged when you're sketching.

Of course, this is a patent filing rather than an official announcement, and it's far from certain that this innovation will carry through to the finished design. If it makes it through to production then we're sure that Microsoft will have addressed these issues.

Microsoft hasn't even announced the Surface Book 3 yet, but given the success of the previous model it seems like a no-brainer. And if it wants to continue its assault on Apple's creative laptops, Microsoft needs to pull out all the stops to make the Surface Book 3 an essential piece of kit for designers, so this could be a really exciting way to get people queuing up for it.

As soon as we hear some concrete details about the Surface Book 3, we'll let you know. In the meantime, check out the latest Surface Book 2 deals.