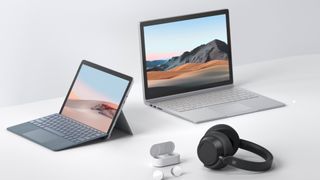 Microsoft has today unveiled a bunch of new Surface devices and accessories including the Surface Book 3 and Surface Go 2, as well as a brand new set of wireless earbuds – and they're all arriving this month.

The announcement comes hot off the heels of Apple announcing its brand new 13-inch MacBook Pro this week, and the most obvious competitor here is the new Surface Book 3, Microsoft's own high-end laptop. Like the MacBook, the new Surface Book features 10th generation Intel CPUs, and Microsoft says it will have a 50% performance boost over the Surface Book 2 (which we've no doubt it'll replace on our list of the best laptops for graphic design).

While the internals sound similar, what potentially sets the Surface Book 3 apart from the MacBook Pro 2020 is its design. Not only do you get the option of a 13.5-inch or 15-inch display (starting from $1,599.99 and $2,299.99 respectively), but the Microsoft machine includes a high resolution touchscreen and removable keyboard, both absent on the Mac.

For many it will boil down to whether you prefer the OS X or Windows software ecosystem, but the physical versatility and matching high specs of the Surface Book 3 could even turn the heads of a few Apple fanatics.

We were big fans of the portable Surface Go (check out our Surface Go review) and the newly announced Surface Go 2, with its 8th generation processor, is said to enjoy a 64% performance boost over the original. There are also some interesting hardware tweaks here, with the addition of dual studio mics and a 5MP front-facing camera. The diminutive device could end up being just the thing for creatives on the go, especially with its low starting price of $399.99.

Bringing up the rear are the brand new Surface Earbuds – which are no doubt taking aim at certain other well-known brand of white wireless earbuds. Whether they'll beat Apple's AirPods on sound quality remains to be seen (or should we say heard).

It's been a bountiful week of hardware reveals, and today's Microsoft Surface announcements won't make the decision any easier for creatives. Both the Surface Book 3 and Surface Go 2 appear, on the surface (sorry), to be very capable machines. You can find them both at microsoft.com.