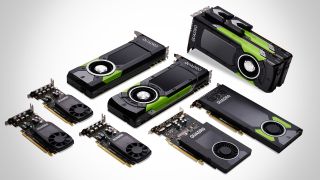 You can never have too much computing power to work with, especially if you're doing intensive 3D or VR work, but even if you're only using Photoshop CC you'll need a lot of desktop grunt if you're using its cutting-edge features on huge images.

And today a fast CPU alone just isn't enough. Increasingly, professional applications require the heavyweight computational power of a GPU, and the latest batch of Quadro GPUs from Nvidia are set to deliver the most performance yet.

The new Quadros are led by the GP100, an absolute monster of a card capable of turning your workstation into a supercomputer. Boasting 16GB of high-bandwidth memory and capable of delivering over 20 TeraFLOPS of 16-bit floating point compute power, it's ideal for simulation and ultra-detailed rendering, and just the thing for intensive deep learning AI applications.

The full range of new GPUs - the GP100, P4000, P2000, P1000, P600 and P400 - use Nvidia's Pascal architecture to provide a visual computing platform that streamlines design and simulation workflows with up to twice the performance of the previous generation.

Whether you want to create more detailed and expansive VR environments, power multiple 5K displays simultaneously or build massive digital signage cost-effectively, the new Quadros have you covered, and of course by combining GPUs you can ramp up the performance even more.

The new Quadro GPUs will be available from March; find out more at the Nvidia site.