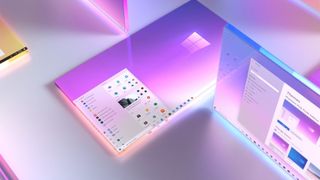 While all eyes are on Apple's WWDC conference this week, which included the announcement of the latest Mac software, MacOS Big Sur, Microsoft could be about to steal the Cupertino company's thunder with a new software reveal of its own.

In brand new screenshots Microsoft shows off an overhauled Windows 10 Start menu, with a clean and translucent new look including Live Tiles that now match the colour of the user's background. There are lots of great Windows machines in our best laptops for graphic design list – and it seems they'll soon enjoy a lovely new UI.

While this is only a system update rather than brand new software, the more subtle design of the Live Tiles will be hugely welcome for anyone who isn't keen on the current, rather garish blocks of colour (below). The screenshots, shared to Microsoft 365's Facebook page, also show off some of Windows 10's new icons, which were revealed in November.

Along with the updated Start menu, Microsoft revealed a new special edition Windows 10 theme (below) for Pride, "inspired by the conversations about LGBTQI+ inclusion and equity".

There's no official word on when the updated Start menu will be available, but with Microsoft now showing the design off on its Facebook page, hopefully it will arrive in all its translucent glory soon. And while a slightly see-through menu might not sound the most exciting update ever, it's important to get software design right – as Apple is finding out the hard way with the backlash to MacOS Big Sur's new icons.