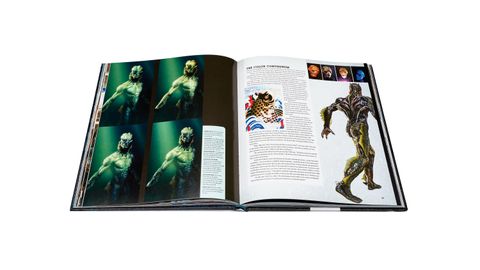 Brimming with fascinating details for both fans of the film and designers in general, this beautifully put-together companion book is one to hold onto.

Nominated for 13 Oscars and taking home four, including best production design, The Shape of Water is sure to secure a spot as one of the best 3D movies in 2018. In this gorgeous making-of The Shape of Water book, readers get to see how these stunning visuals came to be.

The fairy tale film, about a mute woman falling in love with a god-like sea creature, has a wide scope to blend the historical and the fantastical. Reading about how these different elements tie into the overall themes of the film enriches your understanding of the story if you’ve already seen it. And considering that major plot details are referred to throughout, you’ll want to watch The Shape of Water before you explore this book.

Opening with a foreword from the film’s writer and director Guillermo del Toro, the book tells us that The Shape of Water has been del Toro's life-long ambition ever since he watched the 1954 film Creature From The Black Lagoon as a young boy. It’s easy to see the connection between the two films. However, it’s the thoughtfulness of the story and production behind The Shape of Water that has won over viewers and critics.

This thoughtfulness covers every aspect of design in the film, from the character’s uniforms to the materials used to weather expensive wallpaper in an artistic way. It makes sense that the book is split into three sections to cover the characters, the creature and the film’s production.

The underwater creature is given the most coverage. This makes sense given that he’s the film’s main draw, and there’s plenty of fascinating design insight and problem-solving to enjoy in this chapter. Such design solutions range from how to construct a prosthetic for extensive use in water, through to how to sculpt what lead actress Sally Hawkins describes as “a beautiful man-fish with a great butt.”

Meanwhile, the character chapter takes more of a writerly approach to the casting and creation of each persona – complete with del Toro’s bios and journal sketches attached as inserts. These can also be found in the production chapter, which looks at the film's subtle VFX, as well as the set design, music, filming and more.

The Shape of Water review

Brimming with fascinating details for both fans of the film and designers in general, this beautifully put-together companion book is one to hold onto.