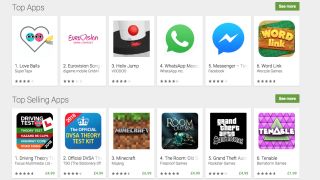 What's in a name? Everything.

The name Terry Bollea probably doesn't strike fear in to your heart, but Hulk Hogan sure does; Eldrick Woods doesn't sound as sporty as Tiger Woods; and Stefani Germanotta doesn't have quite the same ring to it as Lady Gaga. These aliases undoubtedly helped these celebrities become household names. The world of app design is no different.

Sometimes, a first impression is all you have – and that's often the case in the overcrowded App Store, especially when there are so many free apps available,. If you've figured out how to make an app you've done the complicated bit, so make sure your efforts don't go unrewarded by giving your app a great name. In this article we'll share how to name your creation so people pick it over hundreds of seemingly similar products.

Your app name should provide some indication of what it does. If you go for something totally obscure, you'll be relying a lot on your app icon to convey its function, which puts certain constraints on your creativity.

One convention is to pair the basic function of the app with a word that enhances it and adds originality. Think of Evernote, Wunderlist and Tweetbot as prime examples. Since clarity and recognisability are so important, make sure they take the front seat when deciding on a name.

Your initial reaction may be to use a trendy convention to link your creation to other awesome apps – perhaps by adding the 'Insta' prefix or using the moniker of 'Angry' to describe your game that tosses animals at seemingly immovable objects (nobody steal that idea, by the way).

However, what you gain in recognition you sacrifice in legitimacy. Who wants to buy the 75th app named Insta-something? Isn't the original one the only one worth buying? There's something to be said for breaking the trends and starting a new one, even when it comes to naming.

The number one reason why your app's name is important has nothing to do with your app. It has to do with everyone else's. With such a proliferation of apps, it's easy for yours to get lost in the mix.

For instance, let's take an iPhone calculator app. As well as the one Apple makes (aptly entitled 'Calculator'), a quick search yields thousands of other results – there's everything from 'Calculator+' to 'iCalc4me'. If your app isn't very original from a function standpoint, what you call it really needs to be.

If you're really stuck for what to call your app, you might get a nudge in the right direction by using a name generator such as Nameboy or Dot-o-mator. The best way to use these is as kick-starters for new directions or ideas.

For your app to gain momentum and popularity, people need to be able to talk about it in the real world. The trend of taking all the vowels out of a name has died out for a reason. And while 'Zombieeez' sounds cool, when it comes to telling others about it, you're going to need a pen and a good memory for spelling to get that name right.

While you have complete licence to make up new words, use caution when making words that are hard to say and be aware of the impact this will have on how easy the name is to remember. It's certainly possible to have your app reach legendary status without an easy to say name, but again, why take your chances in it becoming popular in spite of that?

If you notice your collection of apps, most use sentence-case (e.g. Candy Crush Saga) or camel-case (e.g. WhatsApp). It may sound like a good idea to differentiate by starting your app name with a lowercase letter or opting for all-caps, in reality, this can delegitimise your app quicker. People will buy what they trust, and breaking the upper/lower convention is a quick way to make your app look sketchy.

The worst thing would be to spend countless hours developing an app, then submit it to the App Store and get it approved, only to then discover the name has been trademarked by someone else for their business.

Even if there are no legal ramifications, you'll want to set yourself apart from what could be a widely recognised name for an entirely different reason. Get on Google and research every last permutation of your name. It may be a bummer to have to go back to the drawing board, but it will save you some headaches later on.

Keep your name short and concise. Long names are arduous to read, difficult to remember, and won't look right in someone's collection of apps. However, with really short names you may struggle to find something that hasn't already been used.

Throw Twitter handles and domain names into the mix and the range of available names becomes even narrower. A smart way to differentiate your app name is by getting creative with prefixes and suffixes. An 'app' suffix makes it clear what your product does, while prefixes like 'go' or 'get' can invoke action.

While there isn't a magic formula for coming up with an app that will pocket you millions, if it's finished and in the App Store, a great name could be the thing that sets it apart and makes the difference between a download and a scroll-past.

Don't let your app's name be an afterthought – you've put time in to developing this thing, so take time in finding the right name. What you name it should shout from the mountain tops what it is and what it does, since you will most likely only have that first glance to make an impression.

If you get your heart set on a name but the actual development of the app isn't very far along, remember that you can't squat on a name, according to Apple. You'll have 120 days total to submit your initial binary in order to hold that name. Otherwise, you run the risk of someone else nicking it.