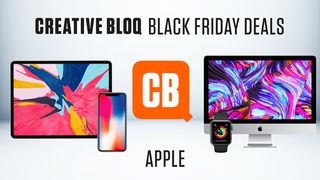 It might seem a way off, but the few months left until Apple Black Friday will fly past. And if last year's big retail event is anything to go by, there are some amazing Apple deals heading our way. In this article you'll find everything you need to know about the Apple Black Friday 2020 sale, including how to bag the best bargains, and a look back on the discounts we saw in 2019.

When the big day(s) arrive in November, we'll be busy curating the best deals right here so you don't miss out. But first let's take a look at the Apple Black Friday questions everyone is asking.

Will Apple have deals on Black Friday?

In short, almost certainly, yes. Apple Black Friday discounts were impressive in 2019, with discounts across the entire range of Apple's devices. 2020 looks to follow suit, however unless you're dead set on shopping in the Apple Store itself, you'll find the best Apple Black Friday deals come from other retailers.

Apple very rarely offers discounts directly on products, with previous years seeing the tech giant offer gift cards given on purchases made during the shopping event instead. That said, if you can't wait until Black Friday, check out our round up of the best Apple deals, which is updated all-year-round.

Where are the best Apple Black Friday deals?

As mentioned above, the official Apple Store is not the place to go if you want to bag a brilliant Apple Black Friday bargain. Based on what we've seen in previous years, below is a roundup of the retailers where we would expect to see the biggest discounts in the Apple Black Friday sale 2020. And, of course, don't forget to bookmark this page for a curated list of deals.

How to get the best Apple Black Friday deal

To get the best deal possible, it's best to have a product and a price in mind. You don't want to end up getting overwhelmed by the options and being unable to make a decision (or panicking and making the wrong decision), so start out with a clear plan.

Once you've decided on the product you're after, you can start tracking its price on various retailers – or even simpler, bookmark this page and keep checking it. You could also set up a Google Alert for the prices you're after. Here are some more tips here on how to make the most of Black Friday.

Are Apple Cyber Monday deals the same as Black Friday?

There are Apple Cyber Monday offers every year, and they're unlikely to be the same as Black Friday. Retailers tend to bring out the highest concentration of bargains on Black Friday itself, and Cyber Monday is slightly less of a big deal. That said, Cyber Monday has historically been the time to bag a tech deal, so who knows?

If you're wondering whether to hold off for a hot Apple Cyber Monday Apple deal, we'd probably advise against it. Some will be offering blanket deals across the whole long weekend, while other promotions will be live for a shorter period, and the best offers will likely sell out.

That's a slightly frustrating answer, but our general advice is to think ahead on what you want to buy. Do you need particular specs or a specific model, or are you happy with whatever model the biggest Apple Black Friday discount happens to be on? Make a plan and if an offer crops up that matches your plans, snap it up then and there rather than waiting on the off chance something better will come around.

If the world follows the same guidelines it is at the time of writing, it's likely Apple Stores will operate their usual opening hours across the Apple Black Friday period. But with uncertainty still looming around the coronavirus pandemic, there are no guarantees any of the stores will be open. If they are and you're in the US, check your local Apple Store opening times here.

The best Apple Black Friday and Cyber Monday deals from 2019

To help you get a feel for some of the kind of discounts we see over the festive shopping event, here's a roundup of the best Apple Black Friday deals from 2019. And if you're quick, some of them might even still be available...

iPad 9.7" (6th gen) | 128GB | Wi-Fi + Cellular: $399 at Walmart
Save $160: This Apple Black Friday deal knocks a hefty amount off the 6th-generation iPad. It's not the newest model, but you get a decent amount of storage, and cell data included for flexibility.
View Deal

iPad mini 4 (renewed) | 64GB: Was $499.99 now $284.99 at Amazon
37% off: These are pre-owned tablets that are tested by Amazon-qualified suppliers, so should work just like new (and are backed by a 90-day guarantee if you have any issues). There's a huge saving on this refurbished mini model.
View Deal

iPad 10.2", 23GB, Space Grey: £299 at Currys
Save £50: The latest iPad model features a bigger screen and Apple Pencil support, making it a great budget alternative to an iPad Pro, and right now you can get this model from Currys with £50 knocked off the price. Also available at Very.

EXPIRED: Up to 20% off Apple iPads at Amazon
Right now, online retailer Amazon is offering up to 40% off selected iPad models. Here you'll find huge reductions on everything from the iPad Pro, new 10.2-inch iPad and iPad Air. DEAL EXPIRED

Apple MacBook Pro 16" with 1 year of Apple TV at Best Buy
Best Buy has some top offers on the new MacBook Pro, which don't see any money off but instead you get a year's worth of Apple TV included in the price. Linked here is the 512GB SSD version, but there's also a 1TB version available with the same offer.View Deal


DEAL EXPIRED MacBook Air 13.3" | i5 | 8GB RAM | 256GB SSD: $1,099.99 at Best Buy
Save $200: Right now you can get hold of the latest MacBook Air for a whopping $200 off. Its thin and light iconic wedge design houses a stunning Retina display with True Tone technology, Touch ID, the latest Apple-designed keyboard, and a Force Touch trackpad. EXPIRED
View Deal

More offers in our guide to the best Cyber Monday MacBook deals.

Apple AirPods (2019) with standard charging case: Was $159 now $144 at Walmart
Save $15: You can get Apple's latest model AirPods at Walmart right now. These super-hot headphones come with the standard charge case at a price that is hard to resist. This deal sold out over the weekend, but it's back in stock now.
View Deal

Apple AirPods (2019) with standard charging case:  £128.97 at Laptops Direct
Save £60: The latest Apple AirPods are on sale at Laptops Direct for Cyber Monday. A price drop of £60 makes this the best offer in the UK right now on this version with a standard charging case. This same offer appeared at Amazon and the BT store, and sold out in double-quick time – so don't hang about.
View Deal

Apple AirPods (2019) with wireless charging case: $164 at Walmart
Save $34: When it comes to Apple AirPods deals, this is a brilliant and rare find. In fact, it's so rare to see such a discount, it's worth acting now if you don't want to miss out.

Get more insights in our guide to the Apple AirPods Black Friday sale.

Apple Watch Series 4 with white sports band: £329 at Amazon
Save £100: If you're not bothered about having the latest Apple Watch, this is a brilliant deal on the previous model. A stylish white strap, GPS and electrical and optical heart sensors are just some of its impressive features.
View Deal

Tablets are always in demand on Black Friday and Cyber Monday, and we saw a lot of good Black Friday iPad deals in 2018. Figuring out which is the best offer, taking into account the different models, storage options and features, can be difficult. We've sorted through the best options with this in mind.

In terms of where to shop, in 2018 Walmart was the place to head for US shoppers, while in the UK, Very, John Lewis and eglobal central all had good deals.

Take a look at the best iPad offers right now in the widget below.

MacBook, MacBook Air and MacBook Pro Black Friday deals are in high demand every year – mainly because, as designers will know, this kind of top-quality kit doesn't come cheap.

So how much does a MacBook cost on Cyber Monday? Short answer: it depends where you go and which model and spec you're interested in. As you might expect the best discounts are typically on slightly older machines, so if you don't mind not having the latest, greatest MacBook then that's often a good way to bag a bargain. Another hot tip is to keep an eye out for refurbished models – there can be some hidden gems on pre-owned models.

In 2018 in the US, Jet, B&H and Adorama were the places to bag the best Black Friday Apple offers on MacBooks. In the UK, John Lewis, Very and Curry's came through with some good deals, and there was also a standout offer from Laptops Direct.

Take a look at the best prices right now in the widget below.

In 2018, everyone was after an Airpod deal. Retailers did not oblige. There were a few little discounts here and there, but nothing that really made a dent in the hefty price tag.

Will AirPods go on sale for Black Friday or Cyber Monday 2019? Well, we think so. We're already starting to see some decent discounts on these true wireless earbuds (the price widget below will pull in the best offers in your region).

These little devices aren't quite as new and exciting now (and there's a fair bit of competition hitting the market in the form of Amazon's Echo Buds and Microsoft's Surface Earbuds), so here's hoping this November brings some strong Black Friday Apple Airpods deals.

There were quite a few good Apple Watch deals on Black Friday 2018, with discounts on the Series 3 as well as older models. The newest model back then – the Apple Watch 4, released September 2018 – didn't get much Black Friday action.

Apple has just launched its Apple Watch Series 5, so Black Friday 2019 might be the time to bag a bargain on a Series 4 Apple Watch.

In the US, the best 2018 Black Friday Apple Watch deals came from B&H, Macy's and Amazon. In the UK, shoppers were better off heading to John Lewis or Very.