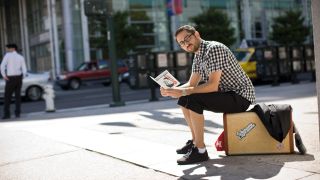 Johnny Earle's cupcake and crossbones logo and vintage 1950s cartoon style has hit the big time. But how did a college drop-out with no formal training end up with an international following and a multi-million dollar brand?

“It was never intended to be a business. I started it as a joke from the back of my beat-up ’89 Toyota Camry,” Earle admits. “I was given random nicknames at work almost every day – I guess ‘Johnny’ is an easy name to throw a word onto the end of – so one day I made a couple of random t-shirts that said ‘Johnny Cupcakes’ for the fun of it. Everyone at work wanted one, and most of the customers did too.”

Word soon spread. “People were curious when they saw me wearing my shirts, so I’d tell them about my brand, and then about my website, and so on,” he explains. Some of Earle’s original customers were touring bands who wore his gear across the globe, building up both a national and international curiosity in Johnny Cupcakes. And with the advent of his first ecommerce website, sales grew exponentially.

Fast-forward two years, and interest in the brand was so high that Earle, who was himself touring with his own band, made the pivotal decision to leave the group and focus 110 per cent on the business.

At the heart of his empire is the distinctive cupcake and crossbones logo design, which can be found in various guises across his range of apparel, accessories and promotional materials. First developed when he started out back in 2001, the vintage cartoon-style emblem is a simple concept that pokes fun at popular culture by replacing familiar icons with cupcakes.

It is now so popular that more than a few dedicated customers sport tattoos of the symbol, and Earle attributes much of the brand’s success to its design. “My logo was my big break,” he says. “It’s a great conversational piece – very memorable and causes a lot of curiosity.”

“I initially sketched up so many ideas: a Statue of Liberty holding a cupcake instead of a torch; a plane dropping cupcakes instead of bombs. At the time, the skull and crossbones were all over the place. I’d always see these guys who were too cool for school so I figured, hey, why not make fun of them by replacing the skull with a cupcake.” It’s a simple idea, but it worked: guys thought it was funny, and girls thought it was cute.

The design has had a facelift or two over the years, Earle admits – in some of his earlier t-shirts the top of the cupcake was too close to the cup, giving the logo an accidental “breast-like” appearance; on other occasions it bled in with the rest of the image. Essentially, however, the design has strayed little from its original concept and remains the same clean, bold logo that Earle first created – testament indeed to its success in an industry where even the best logos need frequent revamping to stay relevant.

A career-defining crunch came in 2004, at Earle’s first trade show. Looking around, he noticed a lot of kids wearing the same trainers that he was. “It got me thinking that maybe I shouldn’t have my shirts everywhere,” he recalls. “People like to have what nobody else has. I decided then and there to keep them out of chain stores, and to be very, very selective of which shops I’d like to keep my brand.”

The decision has been tested over the years: “I had a chance to make a lot of money and sell my t-shirts through Urban Outfitters, Nordstrom’s, Macy’s and more. But I decided not to. My friends and family thought I was nuts,” he grins. “I wouldn’t sell out for all the money in the world.”

Since then, Earle has built a multi-million dollar business from his doodles, encompassing everything from t-shirts and ties to posters, jewellery, handbags and even water bottles – without taking the “sell-out, lazy-man’s” route. “Most companies cut corners and are overly cautious,” says Earle. “They only think about numbers and don’t take risks. I’ve managed to build a strong, fun and different home- grown business without taking the traditional path. Most of my customers are repeat customers: I build memorable experiences for them, whether it be an event, or in the packaging design or detail I put into everything.”

These days, Earle has his own store to house his designs. Two, in fact. His website also invites people to host their own pop-up shops: "you invite the people and we'll bring the tees!"

Opening his first store on Boston’s Newbury Street was a huge risk: partially due to its astronomical rent, and partially because Earle, in keeping with his non-traditional business ethics, had fitted it out as a bakery-themed boutique. “My dad and I installed hardwood floors, stainless- steel baking trays and curved glass bakery cases displaying my t-shirts. The rent was high and I was opening up a bakery that didn’t sell real food,” he laughs. “At the time I didn’t know I was going to make three months’ rent on the opening day. It’s a dream come true.”

When Earle’s LA store celebrated its first anniversary, a queue of people camped outside prior to the event stretched around the block and into residential areas. Earle recalls setting up the shop: “The idea behind the project was to create a memorable experience and destination spot; the ultimate shopping experience. I wanted to transform an empty retail space into a Willy Wonka-inspired bakery, on steroids,” he remembers.

I re-drew the space over and over again with different set-ups. One idea led to another. The build was only supposed to take four weeks, but it ended up taking six months – first impressions are everything, and I didn’t want to rush or half-arse anything.”

As with everything Johnny Cupcakes, attention to detail is key. The checkout is set up like a stove, while one wall is kitted out in custom-built 1950s-style Johnny Cupcakes ovens that randomly open to shoot out smoke and steam. “Plus there’s a 12-foot vintage oven that secretly opens up as a passage to the stock room,” says Earle.

This meticulousness is evident throughout the brand, from the design of his shop-floor ‘experiences’ right down to the individual buttons on his polo shirt range. Of course, they’re not any old buttons – they glow in the dark, and there are four of them, rather than the usual polo-style three. “I wanted to create a classic polo with special Johnny Cupcakes ingredients,” he explains. “Something constructed well, with subtle, unique details. Something I’d like.” These extra ingredients, along with elements such as Earle’s bakery-box packaging, are what have made the brand so popular.

The secrets to success

So what’s the secret to Earle’s success?

“Consistency and simplicity are important, but keeping things collectable and personal is what sets my brand apart,” he says. “It’s more important to me to have a brand that people appreciate, and that has longevity, than making a quick buck and being another fad. Staying in touch with my customers is very important. I wouldn’t be here without them.”

As such, Earle always makes a point of talking to his customers, be it on the shop floor, on social media – or during one of his hugely popular events.

It hasn’t all been plain sailing, and Earle has learned some difficult lessons along the way – such as not to hire your own friends.“More than likely it’s not going to work out, and it isn’t easy parting ways,” he says. “Being in a relationship when you’re trying to put 110 per cent into your brand is near impossible too,” he adds. “Also, getting your product sampled before you give the go-ahead is crucial. Even if it costs a little extra money and time, it’s well worth it to obtain a physical sample before production.”

So what’s Earle’s golden rule for building a brand? “Don’t rush: first impressions are everything,” he advises. “Don’t get bummed out if you go broke either – you have to spend money to make money. If you don’t have much to start out with, take pre-orders for your product.”

And what’s next for Johnny Cupcakes? “More fun events, unexpected products, collaborations, and a lot more,” he says.“I still have to save some surprises, right?”

This article was originally published in Computer Arts in 2008. Subscribe here.