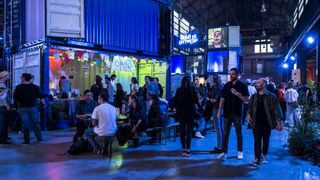 Last September, we experienced a design event like no other. OFFF By Night transformed a cavernous warehouse space in Antwerp, Belgium into a bustling hub of food, fun and flashing screens for a three-day creative extravaganza, where the talks finished at midnight every night.

It's back for a second year from 23-25 November 2017, now called Us By Night – but still curated by Rizon Parein, the hugely passionate Belgian-born designer who first dreamed it up. Here, we caught up with Parein to find out why designers should mark it in their calendars now...

Last year’s event introduced a brave and innovative new format, are you continuing in the same vein for 2017?

Rizon Parein: It was indeed a big wild guess, which turned out to be a huge success. Last year we had to sell a new concept, and convince people... now we know the fundamentals of our concept were bang on, this gives us the confidence and motivation to explore the whole 'nightlife experience' even more.

The conference room itself with its massive screen will probably not change much, but the night market we’re gonna take to the next level, adding a lot more games and sports, an improved Q&A saloon, more massive LED screens, dirty green lasers, light installations, shops and so on... think Blade Runner.

"A theme park for creativity"

In big-picture terms, how are you making the event bigger and better for 2017? Did you get any ‘difficult second album’ type fears?

RP: The lineup the first year was mindblowing – as I frequently visit design conferences myself I just put together my personal best of the best. For the sake of nostalgia alone, I would have loved to invite every single speaker again but that of course would not be a clever thing to do.

I love the community aspect, the same vibe as when travelling back in the day from one graffiti jam to the other. It's one big family, sharing the same interests and up for a party. So it was quite a challenge to build this new lineup to match last year’s fireworks, but so much fun digging into artists. It kind of educates you, scouting all these talents.

I’ve been suggested a bunch of names by Michael Spoljaric, senior creative director at Nike Basketball, who has worked with the cream of the crop of the design world and has a really good view of what’s happening in the scene. Also Playgrounds, the well known design festival in Amsterdam, will be curating a few names especially in the field of film and animation.

For the Q&A saloon we are collaborating with lots of curators, which makes our lineup even more diverse than last year... to name a few: Alice Gallery, Vice, Kris Hoet, with more TBC. We like to see our event as a platform where creatives can plug into. It’s not an ego show, it’s a theme park for creativity.

Last year's night-time format is pretty unusual in design conference terms. What were the biggest lessons you learned from doing so?

RP: Well as I said, it was a big hit. It was so, so much fun, and what we did last year we will do this year but even better. We are working on the food and beverages aspect in particular.

I truly swear by local, honest products, but this comes with a pricetag so it's hard to compete with typical festival fast food. We’re now looking into a way to serve, next to our food stalls, quality food at a lower price. One idea is a huge long table that you can book for one massive dinner a night: a fun way to eat and network at the same time.

Talk us through the 2017 lineup. How did it take shape, and who are you most excited about coming along?

RP: Artists I'm looking forward to? All of them, otherwise I wouldn’t ask them :)

What surprised me last year was how many of us were involved in graffiti, like a third of the lineup. So I’ve invited a few of my old-skool graffiti heroes, like Mode 2 – what this guy's done for the graffiti scene you can't imagine.

Also, last year a few people were calling our event Nike by Night, because so many of the speakers had Nike stuff in their keynote. It's hard to avoid, since Nike works with the best and many of us see it as our dream client.

To have some counterweight, we have this year ex-Wieden+Kennedy José Cabaco, who has a very important role in the future storytelling of adidas. I'm really curious about what his talk will bring.

Finally, what advice would you give to a fellow design event organiser who’s trying to evolve and grow their offering?

RP: Bigger screen, bigger bar. No, it’s not that simple. We had some offers to start our event abroad, but what is key to our success is our venue – we could not just land with our concept anywhere else.

General advice is hard, as each venue has its own story. I'd say try to make it unique, give it that extra touch, keep it human and definitely don't make it too corporate.

What's your ambition for Us By Night in the next five years?

RP: An open air edition, of course at night, at the Hollywood Bowl :)

Us By Night will take over Parkloods in Antwerp, Belgium from 23–25 November 2017. Don't miss out: buy your tickets now!