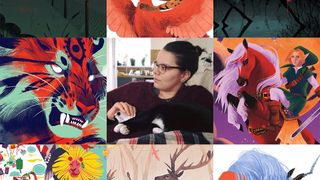 There's an age-old question when it comes to analysing a piece of art: where does the artist end and their art begin? Separating the creator from their work is usually a matter for scholars, but on social media artists and their masterpieces have been brought together with the hashtag #artvsartist.

Having erupted on Twitter and Instagram over the last week, #artvsartist sees creators posting images of their work along with a photograph of themselves. Typically these posts follow a template that sees a group of eight images framing a selfie of the artist in the centre.

Despite taking off recently, the hashtag can be traced back all the way to 2016. On 8 May 2016, Twitter user @LaLadybugTV posted examples of her manga art along with a selfie and the caption "#artvsartist This day is just full of the trend on Insta!". From here the hashtag was picked up by Tumblr users and YouTube animators, before seeing a large-scale revival earlier in April this year.

It's perhaps no surprise that this hashtag been picked up so enthusiastically. There are already plenty of popular hashtags for artists to get involved with, but typically these involve creating new images of robots, mermaids, or anything illustrated with ink. With #artvsartist, however, there's comparatively little work. Artists can simply upload images of existing work, chuck in a selfie, and they're ready to go.

Considering that artists can spend a lot of their time working in isolation, #artvsartist is a great opportunity for creatives to put themselves out there online. It also gives viewers scrolling through the hashtag a good chance to put a face to a name and connect with a bunch of artists you might not have discovered otherwise.

Here are a selection of the many, many artists who caught our eye with #artvsartist. Why not give it a try yourself and see who finds you?

I've been a bit anxious to post this, but you only live once. So this is me, I'm your tubby Welsh girl, un-photogenic to the extreme (this is the only shot I have). I like to draw animals, bright things, weird things, scary things and cats ✨ #artvsartists pic.twitter.com/dbZOkJEZIbApril 12, 2018