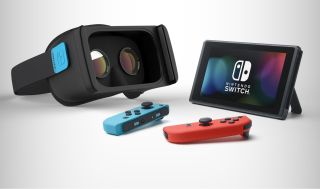 The release of the Nintendo Switch is only a few days away, and fans of the video game company are getting ready to master another console with an experimental design. With revolutionary detachable controllers, players are set to have fun with the Nintendo Switch whether they're at home or out and about.

However one fan has taken this console design further by incorporating VR elements. Created by industrial designer Antoine Beynel, this Oculus Rift-style concept imagines how players could act out a fully immersive gaming experience.

Nintendo is no stranger to virtual reality consoles, having tried to break into the niche with the Virtual Boy console back in 1995. Seeing as that console was panned by critics and branded a commercial failure, it's doubtful they'll be looking to experiment with VR again any time soon.

It's a shame though, because Antoine's concept gives a realistic look at how Nintendo could move into the VR territory again. Explore the whole concept below and who knows, perhaps if Nintendo like what they see, we could all be playing Mario via headsets in the near future.