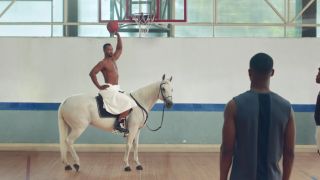 Back in 2010, Isaiah Mustafa became a sensation when he took on the role of Old Spice guy, in a range of commercials for the range of male grooming products of the same name. Now 10 years on, Old Spice guy is back, with a clever and hilarious new take on the already clever an hilarious TV spots of old.

Not familiar with Old Spice guy? Allow us to introduce you. He's the manliest man you've ever met. He's the man you dream your man could be. He's 'the man your man could smell like' (with a little help from Old Spice). The range of viral TV ads showed Mustafa engaging in a range of swoon-worthy activities: strolling topless across the deck of a boat and producing an oyster that opens to reveal two tickets to 'that thing you love', before the tickets turn into diamonds, for example.

Get reacquainted in the ad below. (For more clever marketing efforts, see our roundups of the best print ads and the best billboard ads around.)

While the ads haven't aged badly, and it's all as tongue-in-cheek as it is possible to be, the 'anything is possible when your man smells like Old Spice and not a lady' probably isn't the most engaging messaging for today's gender-stereotype-shunning new generation.

The decade-on range of adverts plays smartly on this, introducing Old Spice Guy's effortlessly cool son, who cringes as his dad carries on with his overtly manly ways. There's a new tagline too: Smell like your own man, man.

There's the log-balancing, there's the slick waist-towel removal, and most importantly, Old Spice guy is still on that horse. We can't get enough.