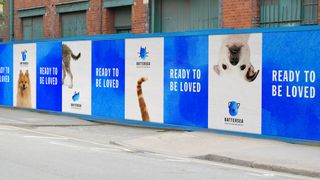 Established in 1860, Battersea is a much-loved British charity that cares for cats and dogs across the UK. Originally known as the Temporary Home for Lost and Starving Dogs, the charity's identity has been tweaked over the years, with the organisation most recently titled: Battersea Dogs & Cats Home.

Today, Battersea unveiled a new identity, created by Pentagram partners Marina Willer and Naresh Ramchandani, which drops the 'Dogs & Cat's Home', instead opting for a new brand line: Here for every dog and cat.

The refresh also includes a new logo design, made up of a family of hand-drawn, abstract watercolour images by Japanese illustrator Hiromi Suzuki, designed to emphasise the charity's commitment to every animal in its care.

Retaining Battersea’s signature blue, the illustrations – made up of five dogs and five cats – are used in varying combinations, making the brand more accessible to different platforms. The illustrations are complimented with a sharp Franklin Gothic wordmark.

The Pentagram press release states: "Pentagram’s approach was to strike out against some of the negative connotations associated with the language and tactics of the charity sector, which often leans into a world of shock tactics, euphemistic language, well-worn tropes and overly-sentimental language."

"Instead, the new Battersea brand deploys honest and straightforward language, expressed by a tone of voice that speaks with joy, principles, expertise and endeavour'."