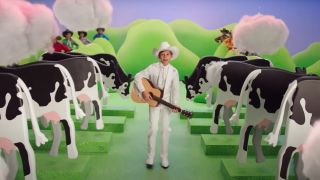 Burger King is known for its unusual advertising strategy, including its infamous 'Mouldy Whopper' ad, which highlighted the "natural ingredients" of said burger. And now, the fast food chain has chosen another mildly off-putting topic for its latest ad: cow farts.

Burger King is claiming that the beef in its Whopper burger now comes from cows that excrete 33% less methane, as part of an initiative to reduce the environmental impact of beef. According to a press release, Burger King teamed up with scientists to test a new diet which causes cows to emit less of the greenhouse gas.

To announce the change, Burger King also hired Michel Gondry to direct an ad (below) explaining the importance of reducing methane. Gondry is known for dreamlike hits Eternal Sunshine of the Spotless Mind and The Science of Sleep – but this new ad is surreal even for him. (Check out our best laptops for video editing if you fancy making your own strange masterpiece).

Led by 11 year-old Mason Ramsey, who once went viral for yodelling in Walmart (haven't we all?), the ad features a country singalong all about, yes, methane ("To change their emissions/Burger King went on a mission/testing diets that will help reduce their farts"). As one YouTuber comments: "The world was falling apart and the yodelling kid started singing about cows farting".

As if that wasn't enough, the ad also features stop motion, cows farting cotton wool clouds, diamond-encrusted gas masks, and Ramsey himself emerging from a cow's rear end. Just your run of the mill burger ad, then.

While a reduction of methane might not seem the most enticing topic for an ad, Burger King and Gondry have somehow managed to turn it into a whimsical delight. Sure, it hasn't exactly got us rushing out to buy a Whopper, but kudos to Gondry for deciding to run with the weirdness of cow farts (or a lack thereof) as a selling point.

We'll be filing this under 'strange but good', where it joins February's aforementioned mouldy whopper ad. Let's just hope Burger King's facts about the reduction of methane turn out to be genuine – as the company found out the hard way with its banned 'Vegetarian Whopper' ads, false or misleading claims can cause one hell of a stink (much like cow farts).