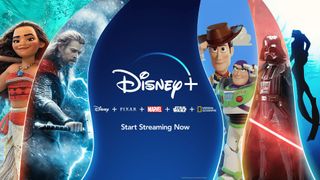 Disney Plus UK launches tomorrow, and today is your last chance to get it at a bargain price. The streaming service, which is already going down an absolute storm in the US, launches in the UK on 24 March. For anyone spending more time inside, a Disney Plus subscription will be a brilliant, affordable way to keep all the family entertained. (Want to know more about the service? Check out our Disney Plus guide.)

To celebrate Disney Plus' early arrival, Disney is currently running an incredible offer, knocking a further £10 off the subscription cost. While that might not seem like a huge deal, the original annual cost of £59.99 was already a bargain, so to be able to get this now for less than £50 makes it a deal not to be missed! We're even considering upgrading to one of the best 4K monitors for the occasion.

Disney Plus' available shows and films will include much-loved classics from Disney, Pixar, Marvel and National Geographic, and there's also previously unseen content, including the aforementioned The Mandalorian, and the catchily named High School Musical, The Musical, The Series.

For what you get for your money, Disney+ offers much better value than Netflix. With this offer, Disney Plus UK will cost around £4 per month. Users will be able to stream 4K content on four devices at once, and there are no hidden extras. They'll also be able to download their favourite shows or films, to watch offline.

To compare, Netflix costs £5.99 per month, but you have to pay more (either £8.99 or £11.99) if you want ultra-HD content, or to be able to stream on one more than screen at a time. With Netflix UK having recently won the rights to Studio Ghibli's content, it seems competition between the two streaming giants is really heating up, and that's before Disney+ has even fully launched. Which will you choose?