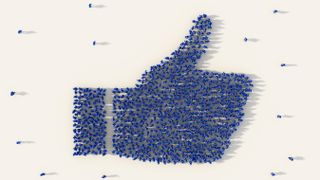 Facebook is considering a test that would hide Likes and reactions on its platform. This follows Facebook-owned Instagram's Like-removal trials in seven countries earlier this year. In the trials, users are able to see who has liked their own photos and videos, but they can't see a Like/reaction count on other people's posts.

App researcher Jane Manchun Wong began speculating that Facebook is considering hiding Likes when she found code within the Facebook Android app. In a blog post she said these moves suggested that Facebook/Instagram "have confidence the pros of hiding like counts outweigh the cons".

We'll assume the pros are improved wellbeing of its users (and Facebook looking like it's doing something about this), and the cons being a drop in users.

In the meantime, if you're still all about the Likes, you can see how to change the font in your Instagram bio.

Wong suggests that hiding Like/reaction counts could make users feel less anxious about how popular they perceive their content to be.

Facebook isn't the only social media platform changing the way it displays information. YouTube is also addressing wellbeing concerns by ceasing to display exact subscriber numbers for accounts with over 1,000 followers – for example by displaying 1.23K subscribers rather than 1,234.

It remains to be seen when and where these tests might commence, and how any changes could affect how social media is used. If no one can see a post's Likes apart from the post's creator, will anyone bother giving it the thumbs up?