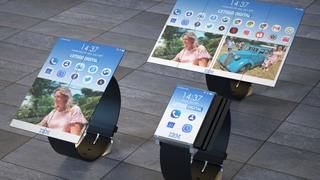 A tablet that you can wear on your wrist and neatly fold away into a screen the size of a watch face might sound like the sort of madcap device you'd expect to find in The Jetsons. But that's exactly what IBM has in mind according to a recently unearthed patent.

Of course, foldable screens aren't a new idea. However early efforts include some notable failures. Just take Samsung's Galaxy Fold, which failed to make our list of the best smartphones for creatives. That's because reviewers reported faults with the phone's foldable screen just days after use. Not what you want for a device that sets you back $2,000.

IBM clearly isn't deterred though. In a patent discovered by the clever folks over at Let's Go Digital, IBM lays out plans to go a step further than Samsung as it outlines a prospective smartwatch-cum-tablet.

You can check out the patent here, and see how IBM refers to a 'variable display size for an electronic display device'. In plain English, this means a display that can be expanded or shrunk down, depending on your needs. There are also diagrams that display how the device could function with one, four, or even eight connected screens.

Let's Go Digital used these plans to mock up up how the displays would look, which you can check out by clicking left to right in the gallery below. If you've always wanted to have a phone or tablet-sized screen manacled to your wrist, this could be the device for you.

Each screen measures 2 x 3 inches. This means that at its maximum size, the eight-panelled wrist tablet would measure a whopping 12 x 8 inches.

It might look a bit absurd to us now, but who knows, if IBM is capable of creating such a device, maybe it'll become the new norm before too long? Alternatively, it might always look a bit naff and obtrusive, like when someone tries to take a photo by holding up an iPad.

As is the case with patents, there's no certainty that this device will become a reality. Although it is an intriguing glimpse into where the information technology company could take us. And considering that it's breaking new ground with its quantum computing initiative, IBM Q, if anyone can make a foldable wrist tablet work, it's IBM.

Has IBM's patent has got you desperate for a smartwatch? If so, why not head on over to our guide to the best Apple Watch deals. Here you'll find the latest Series 4 Apple Watches at discount prices, alongside Series 1, 2 and 3 models. And if you're after more bargains on creative tech, be sure to check out our page dedicated to the best Prime Day deals.