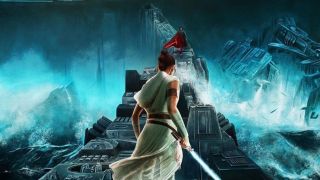 Unless you've been laying low in the Dagobah system, it can't have escaped your attention that a new Star Wars film has just been released. To help generate hype for the ninth film of the epic space saga, The Rise of Skywalker, Disney Studios has commissioned artists to create stunning posters for the movie. And whatever you think of the film, you can't help but be impressed by these incredible designs – these are not your average movie posters.

In our look at the most inspirational poster designs, we've already seen how they can engage audiences. And these creations are no exception. Disney Studios worked with Poster Posse, an illustration and design agency that represents more than 40 artists, to create these unique posters with an artistic flair, all of which have been shared on official Star Wars social media accounts.

According to Poster Posse VP and co-owner Rebecca Thompson, 11 artists were commissioned at the beginning of October to make the striking marketing materials inspired by the films. From epic confrontations between Rey and Kylo, to a fleet of Star Destroyers bearing down on the Rebel Alliance, these illustrators have proven that there's plenty of life in the series, even if it's coming to an end.

And perhaps most importantly of all for people who are yet to see The Rise of Skywalker, they're all completely spoiler free. Check out some of the posters below, and head over to the Star Wars Instagram page to see the full set.

Reaching out to the art community to create standout promotional material has become something of trend of late, and it's easy to see why – the result is a win-win social media campaign. Creatives get to indulge in the world of Star Wars and forge a connection with the saga and its audience, and Disney gets some unique publicity which could convince people to check out the film.

All in all it's been a good year for Star Wars fans. On top of The Rise of Skywalker they've also been treated to spin-off series The Mandalorian, which stars possibly the galaxy's most adorable creature, Baby Yoda. There's also special Star Wars: The Rise of Skywalker Lego sets, which could be the perfect way to treat yourself on Boxing Day.