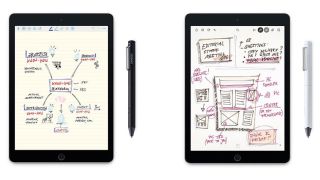 Amazon Prime is now in its second day, and the best Prime Day deals for creatives just keep on coming. There are great savings to be had across devices such as tablets (see the best iPad Pro deals here), and although some of the savings on styluses might be smaller overall, they're still worth snapping up.

The best deals include a Wacom Bamboo Sketch Fine Tip for just £55.36 at Amazon and a Microsoft Surface Pen Platinum for $34 off (now costing $66), also from Amazon, and there's even some money off Apple Pencil – although we'll be honest, it's not much (£10 off a second generation Apple Pencil from Amazon is the best you're gonna get).

You'll need to be a Prime member (sign up here) to get most of the Amazon deals (although not all of them, be sure to check), but this year, other retailers are joining in on these summer sales, so even if you're not a Prime member, there are still plenty of bargains to be had.

Read on to find your perfect styluses, at a discounted price. But hurry, many of these deals will run out at midnight on Tuesday 16 July, when Amazon Prime Day officially ends.

Wacom Bamboo Fineline 3 Stylus: Was $56.99 now $49.95 @Walmart
Save $7.04: Okay, so this isn't a huge saving, but there aren't many deals around on this newest Wacom Bamboo Fineline Stylus model. The Fineline 3 provides excellent pressure sensitivity and comfort. It also charges via USB and is compatible with iPad and iPhone.
View Deal

Apple Pencil (1st generation): Was £89 now £84 @Amazon
Save £5: This is another slightly underwhelming deal, but deals on Apple products are rare, so we'll take what we can get. And just think what you could buy with that extra fiver.
View Deal

Apple Pencil (2nd generation): Was £119 now £109 @Amazon
Save £10: There's never been a better time to get the latest Apple stylus. We don't expect to see any better discounts on this model anytime soon, so snap this one up while you can.View Deal

Microsoft Surface Pen Platinum Model: Was $99.99 now $65.98 @Amazon
Save $34.01: This shiny version of Surface Pen adds an extra degree of style to writing and drawing. Like all the Surface Pens, it offers precise control on drawing and sketching, and low latency.

Microsoft Certified Surface Pen: Was £40.99 now £31.99 @Amazon
Save £8: This might not be the official Surface Pen, but it's Microsoft Certified and compatible with the Surface Pro 3 upwards (see Amazon for a full list of devices). It supports 500 hours of use, is rechargeable via USB and works without bluetooth.
LIGHTNING DEAL: ENDS 16 July 4.40pm BST

Microsoft Surface Pen: £68.50 @Currys
For an Amazon alternative deal, the Surface Pen also costs £68.50 at Currys. There are other colours apart from Black available, but these cost a bit more (from £75 for the Silver/Grey model).
View Deal

Microsoft Surface Pen: £59 @ebay
If you're not bothered about a warranty and are a fan of ebay, then you can buy the 2017 Surface Pen for under £60. This item is still in its original packaging.
View Deal

Not signed up to Amazon Prime yet?