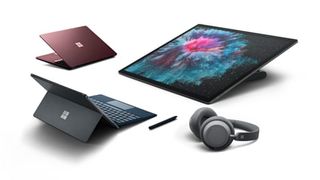 Just a month ago, Microsoft launched two new devices: the Surface Pro 6 and Surface Laptop 2. While we were anticipating plenty of Black Friday Microsoft deals, we weren't expecting bargains on these products, brand spanking new as they are. But we were wrong.

In its early Black Friday sale, AO has knocked £200 off several Surface Pro 6 and Surface Laptop 2 models – scroll down to see the offers. These deals went live this morning and are scheduled to run until 4 December. But if you want one, snap it up now, because we suspect stocks won't last forever. Also take a look at our roundup of all the best Black Friday deals for creatives for more top bargains as they're announced.

Most of the models is this promotion have a blanket £200 off, which means you're getting a bigger percentage saving on models with less storage (you'll save 14% on a 256GB Surface Pro 6, but only 9% on the 1TB version, for example). But make sure you figure out the storage you need to meet your needs – it's not a bargain if it doesn't fit your workflow.

Surface Laptop 2 13.5" (513GB): £1879 at AO
Save £200: For plenty of storage and super-fast loading, the pricey 513BG Surface Laptop 2 is a little cheaper with this discount. Again, you can choose between for platinum, burgundy or cobalt blue.

Also in the AO deal is Microsoft's Surface Book 2 13.5". While this model is older, it's still extremely powerful and definitely worth a look. It was awarded a near-perfect four and a half stars in TechRadar's review, which singled out its "premium design [and] excellent features".