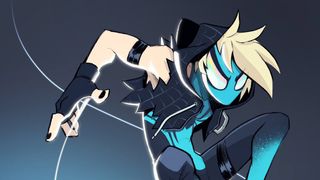 If you're at all tapped into the world of comics and superheroes on social media, the chances are you've seen some weird and wonderful Spider-Man inspired fan art fill up your timeline lately. But why have fans of the famous Marvel hero started sharing art with #Spidersona? What exactly is a Spidersona? And how can you get involved?

Well, it's all to do with the latest Spider-Man film, Spider-Man: Into The Spider-Verse. For those who haven't seen the film (and you really should, after you've finished reading this article, of course), the story sees a range of alternative Spider-Men and -Women from parallel dimensions come together to defeat the villainous Kingpin.

Thanks to its funny script, tight plotting and stunning animated visuals, Spider-Man: Into The Spider-Verse has gone down a storm with fans and critics alike. However, the film has also sparked the imagination of digital artists due to its alternate takes on the Spider-Man costume. In the film we see a film noir variant, an anime inspired design, and, well, Spider-Pig.

It's these variations that illustrators are having fun with in their fan art. Taking the idea of parallel universes and running with it, artists are conjuring up their own Spider-Man personas, or Spidersonas, and creating imaginative character designs for them.

Shared with the hashtag #Spidersona, these superhero creations can be split into two groups. The first one sees the artist imagine what they themselves would look like as the webbed wonder. Meanwhile the second camp take things further by imagining a completely new spin on the Marvel hero.

Top artists have weighed in with their takes on #Spidersona, and the creativity on display is well worth checking out over on Twitter. Here are some of our favourites, starting with one of the earliest creations that predates the hashtag itself.

Want to get involved? Just create your own Spidersona and don't forget to tag it #Spidersona on social media.

Made a steam punk spider cutie for my #spidersona! these spidersonas people have been doing have been amazing~ pic.twitter.com/l2CJxpvopaJanuary 4, 2019

guess i'm riding this #spidersona train as long as i can. anyone else make a symbiote counterpart yet? 👀 pic.twitter.com/gEXsDcjWpZDecember 31, 2018

Finally took some time to doodle my #spidersona! So many different ideas tossing around it took forever to commit to one pic.twitter.com/OxQrkCE0sfJanuary 7, 2019

Been seeing so many cool #spidersona designs, I had to do one too.Got bit by a radioactive daddy long-legs...and well, this happened. pic.twitter.com/afqIxw7VFKJanuary 3, 2019

Late to the party but I wanted to get my #spidersona in before I got all boozed up! Happy New Year from Husky Boricua Spider-Man!!! #Spiderman #SpiderVerse #spiderchanclas pic.twitter.com/lnwv66vKazJanuary 1, 2019

I tried making a #Spidersona and something went horrifically wrong.-Wants to step on Noir, and get crushed by Doc Ock.-Presence is accompanied by heavy EDM music that nobody knows or likes.-Isn’t really capable of much other than creeping out villains (and friends). pic.twitter.com/xgy1vSfTleJanuary 6, 2019

Morning warm up. I gotta blame Mark Brooks for putting the idea in my head as to what my #spidersona would be. pic.twitter.com/oBAcEvQ1j9December 30, 2018