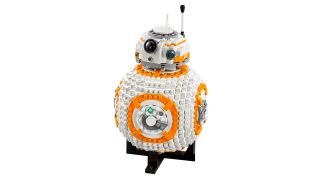 Lego is loved by millions, Star Wars is loved millions, put the two together and fans of both could be about to get the greatest Christmas gift of all. The only dilemma is choosing which Star Wars Lego kit to buy – there's a lot of them. To make things a little easier, right now at Walmart and Argos you can get some impressive deals on The Rise of Skywalker Lego kits, as well as other Stars Wars favourites.

The missile-firing, bomb-dropping Rise of Skywalker Resistance Y-Wing Starfighter is definitely a must-have addition for any Star Wars/Lego fan. The set boasts five characters, including commander and decorated star pilot Poe Dameron, making it perfect for recreating your favourite Star Wars scenes. You can get your hands on The Rise of Skywalker Resistance Y-Wing Starfighter right now for over 20% off and there's also free pickup, so it can be yours in time for Christmas.

If you want something a little cuter, you can get Poe Dameron's assistant BB-8 for more than $30 off, or there are plenty more options available at Argos, which is offering 10% off its Star Wars kits. That includes a Scout Walker 20th Anniversary Set for just £20, or the X-Wing Starfighter toy building set for £16 less than usual. There's never been a better time to buy.

Here we have brought together a selection of the best Star Wars Lego deals, to suit every budget, available right now from Walmart (US) and Argos (UK).

Lego Star Wars: The Rise of Skywalker Resistance Y-Wing Starfighter 75249: $55.99 at Walmart
Save $14: This collectible missile-firing, bomb-dropping Y-wing advanced starship model is a steal at this price. Hurry, we don't expect stocks to last long on this one.
View Deal

Lego Star Wars: BB-8 75187 Building Set: 5 $62.99 at Walmart
Save $37: The diminutive BB-8 droid is brought to life in this faithful recreation that boasts over 1,000 pieces. Definitely a must-have for any Star Wars fan at a price that is hard to resist.

If you're in the UK, check out these epic Star Wars Lego deals from Argos.

If you're after non-Star Wars Lego, check out the best deals on other sets below.