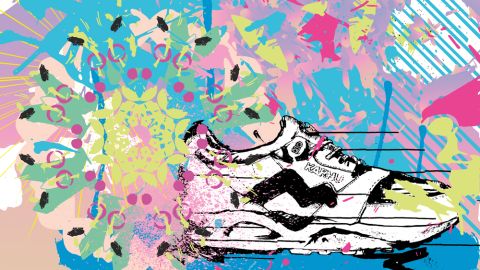 This update has a handful of one-click solutions implemented to enhance workflow and improvements to existing features, but there's nothing here to nudge aside market-leading software. It's evolution, not revolution.

When we looked at last year's CorelDRAW Graphics Suite it was the new features added that stood out the most. Notably, the LiveSketch tool which is an innovative line drawing solution for designers and illustrators that want to bypass producing thumbnails on paper and freely sketch-out vector art at the source.

LiveSketch's functionality really shines when using a small surface area tablet, where smaller gestures can hamper fluid line drawing. Acknowledging its positive reception amongst users, Corel has made further under-the-hood improvements to this unique drawing tool for the 2018 edition.

Other quality-of-life enhancements to existing tools include usability improvements to Fills and Transparency management – now you can delete and mark favourites to filter out unwanted swatches.

The Envelope tool (which functions like the Photoshop Warp Transform) has seen several improvements too – users can now distort grouped vector and imported bitmaps. Plus, the Copy envelope properties option duplicates existing envelope settings from within the document – cutting out the need to repeat the same manipulation, which is handy when creating mock-ups.

These are all welcome updates certainly, and by no means the sum total of improvements to existing features, but let's take a look at CorelDRAW's new toys...

Corel has always favoured a more measured and incremental approach when making updates to its software. Where other developers can sometimes add new bewildering features and overburden their flagship software, Corel prefers to give users a smaller set of very defined tools. This approach to development often manifests existing tools found elsewhere in other creative apps (with a Corel twist, of course) or as solutions that combine a subset of common tasks into a one-click tool. CorelDRAW 2018 offers a bit of both.

Kicking things off is the Block Shadow effect, which generates an instant 3D extruded shadow to type and objects. You can opt to input values into the Properties bar to manage the effect, but the drag-and-draw tool method is impressively quick and intuitive to use.

A nice detail with the drag-tool is a colour picker pop-up for the shadow hue, though being able to apply gradients here also would be a welcome addition in the future. We can see this tool becoming a huge timesaver when creating infographics.

The next standout feature is the Impact tool which generates speed-lines and bursts commonly associated with traditional comics and manga art. The effect is non-destructive and defined as either Parallel or Radial. You can edit line weights, line style and wide point position, start and end widths and spacing steps. Even with a starting set of only two editable lines, the variation once you begin altering these parameters offers some pleasant results.

Saving the best for last, there's the new Symmetry drawing mode, which allows artists and designers to build up drawings and create designs quickly by mirroring a drawn path and/or object(s). Anyone familiar with Corel's powerful real-paint emulator Painter will recognise similarities to the Kaleidoscope tool. You can edit the number of Mirror lines and source angle, while using a mix of elements including objects with varying patterns and transparency settings.

A nice inclusion is the ability to add a new object to the symmetry group by clicking 'W' when you drag the new shape over the active symmetry area. This has real-time results. Again, it's one of those tools that once you adopt it into your workflow, you begin to see the timesaving benefits, and it can be a good starting point for generating designs or kicking off elements within a composition.

It's these new features and improvements that call us to bang the same drum as we did last year and ask Corel to make CorelDRAW an affordable standalone option.

This update has a handful of one-click solutions implemented to enhance workflow and improvements to existing features, but there's nothing here to nudge aside market-leading software. It's evolution, not revolution.