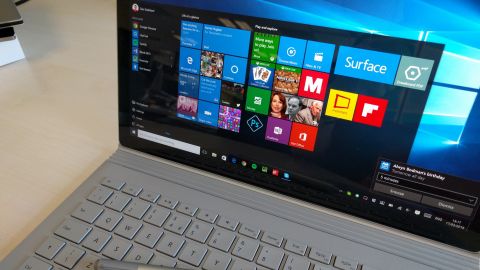 Although the MacBook Pro – and Microsoft’s own Surface Book 2 – are formidable opponents, the Surface Book remains hugely powerful and flexible for the creative professional. You do need to want the flexibility of the tablet part to make it worthwhile, though (and you’ll need ).

While this model has now been replaced by the Surface Book 2, there are plenty of original Surface Book bargains and Black Friday deals to be had. The fact remains that this is a formidable device if you’re in the market for a PC as an alternative to Apple’s MacBook Pro.

There’s now no reason not to use a Windows machine for creative work and Microsoft’s continued preaching about Windows as an operating system for creatives goes right to the heart of Apple’s traditional stronghold.

The Surface Book is, from first pickup, a device that makes an impression. The build quality and overall production is stellar.

As with the newer model, there’s a flexible, accordion-like hinge that’s a masterpiece of industrial design. You get the Surface Pen with the laptop – and whilst it isn’t as ergonomic as the Apple Pencil, say, it’s pressure-sensitive and accurate. The display also features 10-point multi-touch. There’s also the Microsoft Ink workspace, which when activated enables you to quickly sketch, write notes or annotate your screen (the latter being useful for client amends and collaboration on projects).

The Surface Book is a hybrid, which means you can detach the screen and use it in Windows 10 Tablet Mode. Just hit the button next to the Delete key and the screen pops off using a clever muscle wire mechanism. Apps such as Illustrator can be used in Tablet Mode as well, so the Surface Book is not only a super-powerful machine for video editing and 3D, it's also pretty much the ultimate sketchbook.

The Surface Book has another trick up its sleeve – something that illustrators and video editors will love. Detach the screen, turn it over 180-degrees, fold the laptop down and you have a sketchpad you can use in an entirely natural way. Raise the screen up a bit and you can use it as a display for reviewing video. It’s hugely flexible.

The screen is absolutely stunning. It’s thin, bright, and hugely responsive to touch and stylus control. Putting the resolution all the way up does result in some pretty small icons, but when editing using the Surface Pen it’s simply a joy to use.

Your choice of model depends whether the Surface Book is your main machine or a creative ‘on-the-go’ device. As someone pushing say, Adobe Creative Cloud to its limits, you’ll need top specs in your laptop. We recommend the Intel Core i7 2.6GHz model with 16GB of memory and the Nvidia discrete GPU (with 2GB RAM). You’ll probably need 512GB of storage. If you just need an on-the-go device, perhaps go for the lower-end model – you still get Core i7, 8GB RAM, and 256GB SSD.

Coincidentally, the tablet part of the machine uses integrated Intel HD Graphics, which is more than enough to drive the display when detached. Coincidentally, if you go to detach the tablet when using an intensive app, the system will warn you.

All this means that the Surface Book races through simple tasks in Photoshop, Affinity Designer and doesn’t struggle one bit with more complex video projects in Premiere.

There are two batteries – one in the tablet and one in the main body. The tablet part only lasts around 4 hours, but with both batteries you’ll get around 10-11 hours of use. Microsoft originally quoted up to 16 hours, but we never got that much out of it, especially when watching video or using creative apps.

There are healthy number of ports for expansion here with two USB 3.0, a full-size SD card reader, Mini DisplayPort and headphone jack. The original Surface Book is slightly too old to feature USB-C, although there is one on Surface Book 2.

Other specs include an ambient light sensor, accelerometer, gyroscope and magnetometer. There are two cameras, front and back on the display – the rear comes in at 8-megapixel and can shoot at 1080p; the front 5-megapixel (also able to shoot 1080p video). There’s even facial recognition sign-in, which works 99.9 per cent of the time in our experience. And Dolby-enhanced speakers make the Surface Book sound as good as it looks.

Moving over from Mac

Of course, you may be moving over from a Mac (or at least thinking about it). The Surface Book is undeniably more powerful than the MacBook Pro 13-inch, and has a number of features – such as being able to flip it to ‘draw mode’ – that the designer or illustrator will really like. But Windows 10, although hugely refined, will feel foreign and a little unintuitive to begin with.

There’s no real problem with files any more – Adobe’s cross-platform compatibility is excellent, although you may need to look at your font file types.

Why you should - or shouldn't - buy the Surface Book

Even though it’s been replaced by the Surface Book 2, the original model remains a formidable computer. With system requirements for software not increasing at anywhere near the rate they once did, there’s no reason why a Surface Book 1 couldn’t live with you for the next half-decade, especially if you have the discrete Nvidia graphics. The new model does offer a few advantages – the USB-C connectivity being one of them – but if you’re not too worried about that, snap one of these up before they disappear.

Although the MacBook Pro – and Microsoft’s own Surface Book 2 – are formidable opponents, the Surface Book remains hugely powerful and flexible for the creative professional. You do need to want the flexibility of the tablet part to make it worthwhile, though (and you’ll need ).