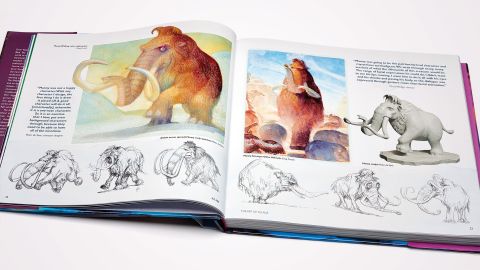 A brilliant art book worth owning regardless of whether you're interested in the film.

The art of… film books we see tend to be a mixed bunch. Some feature a lot of art, but few words. Others cover the maker's approach to the film, but precious little information about the artistic process. Some, including The Art of The Jungle Book don't even mention the names of the artists.

The Ice Age franchise is aimed at young children and pre-teens, so we weren't expecting a lot of deep insights from this volume. How wrong we were. The moment you hold the book in your hands, you sense something's different. For a start, it's huge and heavy, signifying both its high page count (304) and decent paper quality. And each one of those pages is packed with content and analysis.

Author Tara Bennet has penned over 25 movie and TV companion books, and clearly knows how to craft a narrative. But you also sense that Blue Sky, the studio behind the films, along with Rio, Epic and The Peanuts Movie, has fallen over itself to help out here. Because this fascinating read tells you everything you wanted to know in great detail – and more besides.

Covering the first four Ice Age films, along with the short films and a preview of the fifth, Collision Course, there's gorgeous artwork galore on show, including sketches, digital paintings and art created using traditional media. The text is cleverly interwoven among these visuals, resulting in a momentous amount of work and words to co-exist without one ever overpowering the other.

We learn how Blue Sky got started and how each film got made. We're introduced to the main themes, story arcs and characters; how the films evolved through production, where rewrites occurred and where the jokes came from. And as you'd expect, there's a mass of detail about how the art was created, from Peter de Sève's "scattershot" approach to his preliminary sketches of Manny, Diego and Sid, to how art director Tom Cardone's approached "presenting the environmental threat as another character."

There are also plenty of preliminary pencil sketches, showing such details as the different expressions on the face of T-Rex Boy (from 'Smile: Pushed Teeth' to 'Closed Smile: Extreme'), as well as storyboards on show. We also see technical explanations of the CG elements, such as how the fur on the animals was made to move more like hair.

This is a rare example of an art of… book we'd recommend even if you have no particular interest in the film itself.

This article originally appeared in ImagineFX issue 139; buy it here!

The Art of Ice Age

A brilliant art book worth owning regardless of whether you're interested in the film.