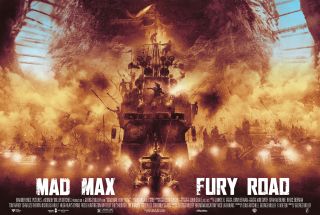 “I’m still amazed at exactly how much detail can be achieved through the screen printing technique,” says Karl Fitzgerald, a relative newcomer to the medium. Now working with galleries and studios who have a love for the bygone age of painted-style film posters, Fitzgerald’s screen print vintage poster commissions have seen him reinterpreting iconic characters and settings in his unique art style.

Fitzgerald was originally inspired by Chris Weston’s The Good, The Bad and the Ugly screen print poster. “It was the first screen printed movie poster I saw in the flesh and it’s what made me want to get into this industry,” he says.

To his delight, Fitzgerald has found himself working through a long list of licensed titles. It’s enjoyable, of course, but also involves proper research. “I start by re-watching the film, taking notes and then doing small sketches and studies,” he says. “I look for key scenes and really try and immerse myself in the atmosphere and environment, because that’s what my paintings focus on.”

But with a limited palette of just six or seven colours, Fitzgerald has to plan his work carefully to ensure he captures the likeness of recognisable actors and characters. “As these are such iconic films, attention to detail is very important,” he says. “Fans will pick up on any inaccuracies in terms of costume or props.”

Beginning with pencil sketches to nail down the concept, Fitzgerald graduates to Photoshop to complete the painting before the screen printing begins. The colour restraints don’t appear to inhibit his posters, as the results are beautiful, deeply textured new takes on familiar stories.

“With these particular posters, I was trying to show the relationship between the character and their environment,” says Fitzgerald.

It isn’t all hard work for the young artist though, as he’s also been basking in the warm reception his posters have received. As for the future, he’s excited to see where screen printing will take him. “Plus,” he says, “It’s a great excuse to watch my favourite films again as ‘research’!”

For more of Fitzgerald's art, visit his Facebook page.