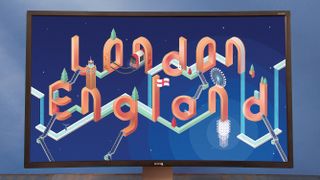 Perspective is everything in design. If something you’ve drawn has a perfect perspective, it will help your work look more realistic; alternately, Pablo Picasso made history by drawing with a very skewed sense of the reality around him.

Isometric drawing is as much of a science as anything, though. It has a very strict set of rules when it comes to what goes where. That’s pretty difficult to sit down and draw yourself, but when it comes to Photoshop, you can create a guide for anything.

In this Photoshop tutorial, we’re going to set out a perfect isometric grid before we build a world on hexagonally facing lines. In this London-inspired image, we’re going to trace the Thames isometrically, and even create isometric versions of landmarks. You’ll find that anything can be created on this grid, since it simply holds cubic shapes together. Curves can simply be drawn from corner to corner.

Everything in the image is going to follow this structure too. You can use images to copy, you can follow our steps religiously or you can design your own icons following isometric patterns. It’s entirely up to you – within the limits of isometry, of course.

Begin by creating a new document of 20 x 20 pixels. Create a black strip down the right and bottom of the document with the Rectangular Marquee tool. Use the Grid if you need to, by hitting Cmd/Ctrl+’.

Go to Edit>Define Pattern. Name it and then click OK. Create a new 1920 x 1080 document by going to File>New, and then go to the Paint Bucket (G). Use Pattern fill and on a new layer, fill with the pattern you’ve created.

Now we’re going to make the pattern isometric! Make the width and height much bigger, the angle 35 degrees and place in the centre of the document. The grid should be made of diamond shapes.

Use the Type tool and create the text that you want to use across the document; we’re going with ‘London, England’. This is important, as it will dictate the size, spacing and whole look of your isometric poster.

Create isometric letters with the Pen tool, following the guide that you created. This is a trial-and-error part of the process, and will take the longest of everything. Experiment with shapes and Fill with #808080 for now.

The isometric letters are going to have to have one side that predominantly faces forwards. Work out where the curves are on each of the letters by reducing the opacities. This might take some time to figure out, and you may need to redraw some letters.

Group each set of layers for each letter. Create clipping masks for each, and add either light or shade to the letters so that they appear 3D. Work out where the light is in the image and judge accordingly.

Now, we’re going to add objects to the scene. Create a box using the isometric guide, lightening and darkening either side of the box to create perspective. Create two circles, and Transform these to fit into the box along the guide; add a Stroke to the circles using Layer Styles.

Next, we’re going to create a flag. Again, use the Pen tool to draw along the guide, and then fill with white. Clip layers to this, and touch soft black brushstrokes over one side of the flag to add shade.

Trees are easy to create with the Pen; create a triangle with the two bottom sides lining up along the isometric guide and then darken one side. Repeat this twice, then add a stump. Colour with an Overlay layer.

We’ve created escalators using the same methods we used to create the other objects, using the isometric guide to draw over. After that, we’ve used a real map of London to roughly trace the Thames and draw a white outline for some water to fill.

Use the Pen tool to curve the edges of the white structure that you’ve just created, and fill with #808080. Use a soft, black brush to create the illusion of a curved space for the water to sit in.

Use the Pen tool to select the grey space in each of the white structures and falling from the top structures, and fill with blue on a new layer. Set this layer to Hard Light to make it look like it’s actual liquid. Clip a white layer and delete a jagged pattern in the middle for added effect.

Create a new layer and add dots in the intersections of the lines like you can see in the screenshot. Select the back rows of these dots and reduce the Lightness to -10 by using Hue/Saturation (Cmd/Ctrl+U). Duplicate this downwards to create more dots.

Create the same effect three times with multiple rows of dots, then resize the two latter ones. Stack these to create a chandelier effect. On new 20% layers, create white dots to suggest light emanating outwards.

Use a stock photo of Big Ben to draw the clock with the Pen tool; you don’t have to be as detailed, though, of course. Draw it in shades of grey; draw the spire to one side of the building rather than straight upwards, too.

Colour Big Ben with some Overlay layers, duplicate the layer and then flip this new one horizontally. Resize both layers and Skew with Free Transform to fit along the guide that you have created.

Make any final flourishes that you’d like to add more to the image; this might include stars in the background with little dots, a whale in the Thames or altering the colour with a Curves adjustment.