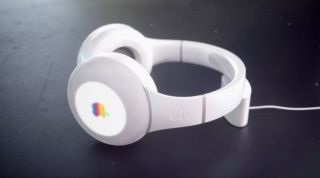 A render of how Apple's headphones might look (Image credit: Curved)

While the design of Apple's original AirPods was widely mocked when they first appeared in 2016, the tech giant has had the last laugh – the white wireless earbuds are now a staple of the street. Even, perhaps, as recognisable as the original iPod earphones became back in the noughties. It's no surprise, then, that Apple is apparently planning to expand the line-up with a pair of over-ear wireless headphones.

According to Bloomberg, Apple is working on two versions of the headphones: a fitness-focussed model, and a more premium edition featuring "leather-like fabrics". Perhaps most excitingly, several elements such as the ear pads will attach magnetically "so they can be replaced by the user" – potentially making the headphones customisable (like the Apple Watch and its many straps, perhaps?).

With no images doing the rounds, we can only guess what they'll look like – but we're sure they'll be a great-sounding set of cans for iPhone users (don't forget to check out our best iPhone apps for designers if that's you).

While we have no idea how the headphones will look, German company Curved was ahead of the curve (sorry) back in 2018, when it put together this render (above) of what Apple headphones might look like if they took their design cue from the company's HomePod speaker. We love the retro styling – particularly the use of the old Apple rainbow logo.

The headphones were first rumoured by Jon Prosser, an established Apple leaker. Prosser's track record is solid – he got this week's April 15th release date of the new iPhone SE spot on in various tweets. Prosser refers to these headphones as 'AirPods X', but if these are headphones and not 'ear pods', wouldn't 'AirPhones' be more appropriate? He also suggests Apple's longterm plan is to "phase out Beats", the company's other headphone brand.

Whether Apple's over-ear headphones will become a fashion accessory like their older (but smaller) siblings remains to be seen. But with the sound quality of full-size headphones and the siri-powered wireless functionality of the rest of the AirPods range, we've no doubt they'll become a hugely popular piece of kit.