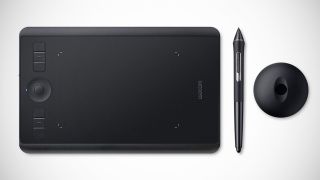 Wacom's Intuos Pro is the go-to device for any designer who wants the best possible surface for honing your sketching skills or learning how to draw. But if you've ever felt that that the Intuos Pro was just a bit too big and chunky then we have great news for you: Wacom's just launched the Intuos Pro Small, its tiniest and most adorable model yet.

Actually, it's not that small. This new model measures 269 x 170 x 8 mm, making it about the same size as the new iPad Air (see full specs in our in-depth iPad Air review); no way are you going to fit this in your pocket. But if you're short on desk space or fancy something a little more portable, then the Intuos Pro Small does the business.

It's the same as the bigger models in terms of performance, using Intuos' Pro Pen 2 technology to give you over 8,000 pen pressure levels, 60-odd levels of tilt sensitivity and multi-touch gesture control. The only concession to size is that you get fewer ExpressKeys; six rather than the eight that you'll find on the Medium and Large models. That's not too much of a sacrifice, and the Intuos Pro Small still features a TouchRing with four customisable functions.

Like its larger siblings it also comes with a battery-free Pro Pen 2 (plus a pen stand containing 10 spare nibs), and it'll connect to your Mac or PC either by USB or Bluetooth. And while it isn't particularly tiny, it's just the right size for putting in a bag with your laptop so that you can go out and create wherever you want without having to lug too much kit around with you.

Of course if you want a truly pocket-size digital sketchbook, you can't go too far wrong with the new iPad Mini, which is compatible with the Apple Pencil; however that setup will cost you quite a bit more than the Intuos Pro Small. It's on sale for $249.95 / €229.90 / £199.99, which is quite a saving compared to the Intuos Pro Medium. If you need some compact Intuos Pro action in your life, check out our deals below.